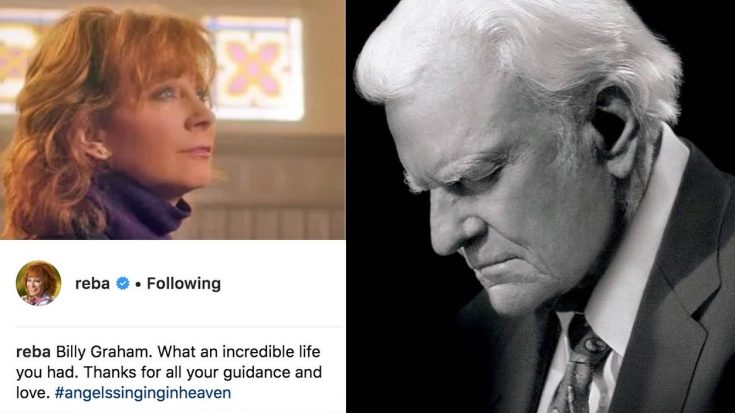 On Wednesday (February 21), the world learned the sad news that the beloved Reverend Billy Graham had passed away at the age of 99. The news of his death was confirmed by Jeremy Blume, a spokesperson for the Billy Graham Evangelist Association.

Known as one of the most influential preachers in history, Graham’s sermons were broadcast on a major scale on both television and radio. As a result, his voice became a familiar presence in the homes of millions, including celebrities.

Because of Graham’s immense influence, he ended up touching the lives of many of your favorite country music singers. After news of his death went public, several country stars took to social media to express their feelings of grief, including Tanya Tucker, who called Graham “the greatest preacher (teacher) in our world.”

One of the most affectionate messages came from Reba McEntire, who reacted to the news shortly after it broke. While McEntire is known primarily as a country artist, her most recent album was a gospel record. That record, Sing It Now: Songs of Faith and Hope, led to McEntire winning some notable awards: the Dove Award for Bluegrass/Country/Roots Album of the Year and the Grammy Award for Best Roots Gospel Album.

Although Sing It Now was McEntire’s debut venture into singing gospel music, she has never been shy about sharing her faith with her fans. So that’s why it came as no surprise that she had an emotional reaction to the news of Graham’s passing.

Taking to Instagram, McEntire shared an entirely black and white photo of Graham along with a short, but compassionate message. She wrote about his wonderful life, and showed her gratefulness to him.

“Thanks for all your guidance and love,” McEntire wrote, including the hashtag #angelssinginginheaven.

Billy Graham. What an incredible life you had. Thanks for all your guidance and love. #angelssinginginheaven

It’s clear from McEntire’s post that Graham meant a great deal to her, as he did to so many others. Our hearts go out to his family and friends during this sad time. May he rest in peace.