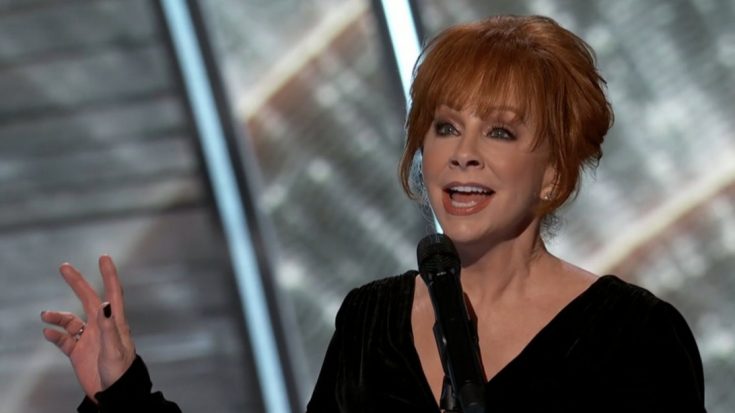 For the first time in 31 years, Reba McEntire performed on the Academy Awards stage, but this time she wasn’t alone. The singer’s stage band included some a-list musicians as she sang her Academy Award-nominated song “Somehow You Do.”

In an interview prior to her performance Sunday night, McEntire revealed that she wasn’t initially excited to be performing. Her reason why was influenced by the tragedy she endured just nine days prior to her 1991 Oscars debut.

On March 16, 1991, a plane carrying seven members of Reba’s band, her road manager, a pilot and co-pilot crashed killing everyone on board. Reba chose to perform despite the heartache she was going through. She took the stage at the Oscars where she sang “I’m Checkin’ Out” from Postcards From the Edge.

This year’s invitation evoked a lot of emotion from the singer.

“I was very emotional yesterday about the Oscars, because I said yes to the Oscars in ’91 and then the plane crash happened,” McEntire told reporters on March 24. “And then I went ahead and sang the song because I felt [road manager] Jim Hammon talking to me, saying, ‘Go do it for us. We’re checked out of this heartbreak hotel.’”

When asked if she is excited for her upcoming performance, the singer said “I don’t feel excited.”

“And so I finally figured it out yesterday,” she added. “I thought if I got too excited, something could happen. So I said, ‘God, I’m just gonna give it up to you,’ and it lifted like a hundred pounds. We went to rehearsal and I had a great time.”

McEntire gracefully took the Academy Awards stage Sunday (March 27) to sing “Somehow You Do,” the Diane Warren-penned song is nominated in the Best Original Song category.  Reba was joined by Kevin Jonas of Jonas Brothers fame who accompanied her on guitar and Blink-182 drummer Travis Barker. Cameras showed Warren with tear-filled eyes as Reba performed.

Earlier in the evening Reba walked the red carpet with her longtime boyfriend Rex Linn. Reba looked stunning in an emerald green sequin gown, similar to the color she wore during her first Oscars performance years ago.

See a clip of Reba’s performance of “Somehow You Do” in the clip below.