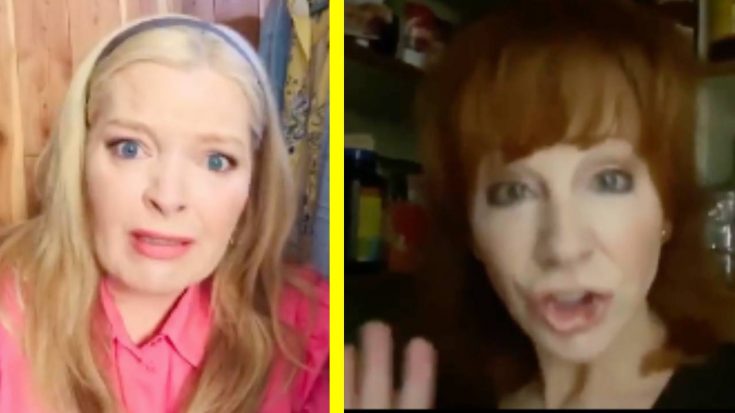 For the first time since 2007, Reba McEntire and Melissa Peterman reunited as their characters Reba Hart and Barbra Jean from the hit sitcom Reba.

The show ran from October 5, 2001, to May 5, 2006 on the WB and on the CW from November 19, 2006, to February 18, 2007. The series followed McEntire’s titular character as she navigates single motherhood after her husband left her to be with his younger dental assistant Barbra Jean.

Reba and Barbra Jean’s relationship is easily a highlight for any fan of the show. Reba’s disdain for Peterman’s character for breaking up her family is very clear, but over time, Reba warms up to Barbra Jean and eventually sees her as a friend.

In real life, McEntire and Peterman have stayed extremely close since the sitcom wrapped, often sharing photos from their vacations and outings together. Peterman even served as a writer for McEntire when she hosted the ACM Awards in 2019!

Fast forward to April 2020 when most of the country is under strict stay-at-home orders due to the coronavirus outbreak. People have been begging for creative content from entertainers, and McEntire and Peterman heard those cries.

In a funny Instagram video, the two revived their characters Reba Hart and Barbra Jean and acted out a little sketch to see what they would be up to during a quarantine.

Barbra Jean started the video hiding in her closet, admitting she has taken to day drinking because her husband Brock and their son Henry have painted a checkers board in their living room and are using frozen pizzas as the game pieces.

She also had to trade her precious Beanie Babies collection for toilet paper!

The worst part of quarantine according to Barbra Jean? She lives down the street from Reba, but can’t “come over and give my very best friend a hug!”

The video cut to Reba, who looked like she was hiding from her kids, too. Reba said even a hug from Barbra Jean would be “welcome” at this point, so you know she’s going crazy too!

Watch the funny skit below.