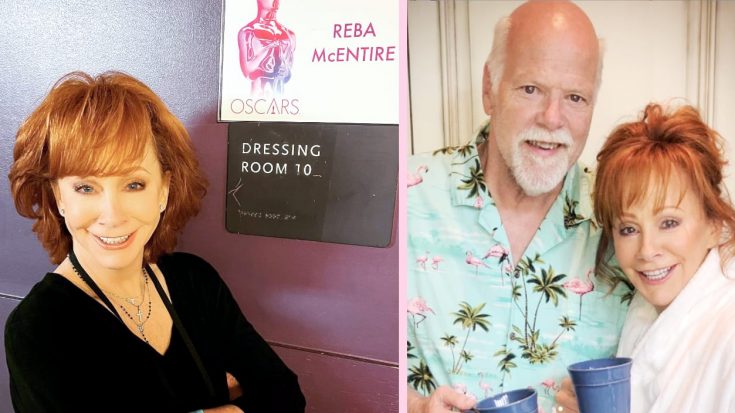 On Sunday night (March 27), Reba McEntire delivered her first performance at the Academy Awards in 31 years. She sang the Diane Warren-penned song “Somehow You Do, ” which was featured in the film Four Good Days.

“Somehow You Do” was nominated for the Academy Award for Best Original Song. The song “No Time to Die” from the James Bond movie of the same title ended up winning. The trophy was awarded to its songwriters Billie Eilish and Finneas O’Connell.

Still, McEntire’s performance of “Somehow You Do” was a standout moment of the night.

Reba McEntire performed "Somehow You Do" at the #Oscars…with Travis Barker on drums. https://t.co/fxeOVlM25I

McEntire kept her fans updated as she prepared for the Oscars. Prior to the ceremony, she shared some photos that showed her getting ready. The first picture captured McEntire smiling while getting her hair done.

She followed up an hour later by posting a photo of her wearing her red carpet ensemble. Her good friend and Reba co-star Melissa Peterman put it best when she commented that McEntire looked “Absolutely Stunning!!!!!”

McEntire complemented her dress with jewelry from Rahaminov Diamonds and shoes from LaDuca Shoes. But her best accessory was her date…her boyfriend Rex Linn!

Linn, an actor known for his roles in CSI: Miami and Better Call Saul, has been dating McEntire since 2020. The couple first made their red carpet debut at the CMA Awards in November 2020. They’ve been inseparable ever since!

Photos show that Linn rocked a classic black suit while walking the red carpet with McEntire at the Oscars. They both looked amazing!

See some of McEntire and Linn’s red carpet photos below.

The QUEEN @Reba knows how to rock a red carpet! #Oscar pic.twitter.com/LSTkJFvVXF

Reba
Happy Birthday 🎊🎂🎉🎈
Your BDAY present is is in your Right hand 🤗 Hold it tight and never let go! ⁦@reba⁩ ⁦⁦@rexlinn⁩ pic.twitter.com/hkbl0l0rts

.@Reba McEntire and boyfriend #RexLinn were all smiles as they made their way down the #AcademyAwards red carpet. #Oscars2022 #Oscars https://t.co/1qmMALn9j8

McEntire later wore a beautiful black dress when she sang “Somehow You Do.” Linn could be seen proudly applauding for her at the conclusion of her performance.

Watch a report about McEntire’s Academy Awards performance and see Linn’s reaction below.