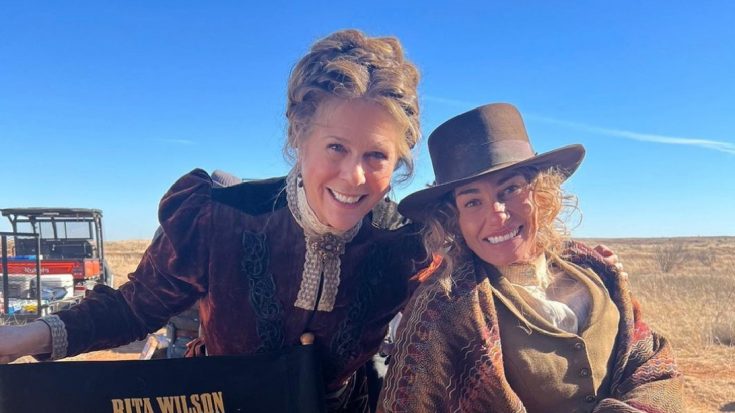 Faith Hill’s real-life best friend Rita Wilson made a guest appearance on the latest episode of 1883, and the pair appeared to have quite a time, according to a newly released clip.

In the episode that airs Sunday night, Wilson plays a Doan’s Crossing storekeeper named Carolyn who befriends Margaret Dutton, played by Faith Hill. In a clip shared to YouTube, Margaret is shopping in the store when Carolyn asks if she would like a lemonade. Margaret kindly declines, but takes Carolyn up on her offer for a something stronger.

“How ’bout a whiskey punch?” asks Carolyn. “Looks like you could use it.”

As Margaret makes her way to the counter she asks, “Would you join me?”

“Sister, I’ve been joining you since noon,” Carolyn replies.

The scene cuts to an intoxicated Margaret and Carolyn laughing uncontrollably. Margaret’s husband James Dutton, played by Tim McGraw, doesn’t seem impressed with their behavior as he tries to communicate to his wife that he is going to study the river.

“Can I trust you to stay here?” James asks his wife.

“Yep, this long. As long as this is!” Margaret answers while pointing to a whiskey bottle.

Faith Hill shared the clip to her social media saying, “Clearly, there was no fun had shooting these scenes! A pleasure to share the screen with @ritawilson” Rita Wilson replied, saying that it was an honor to share the screen with Hill and McGraw. “You are both excellent in this series. So proud to be a part of it. And, oh yeah, we had ourselves some fun!”

“You never want to botch a scene when you got Tom Hanks in there with you,” Tim McGraw told Cinemablend.  “But yeah, he’s a great guy. We’ve been friends for a long time. Rita, his wife, and Faith are best friends, and Tom and I’ve been friends for 25 years, 24 years.”

See Faith Hill and Rita Wilson enjoying some whiskey punch in the clip below.