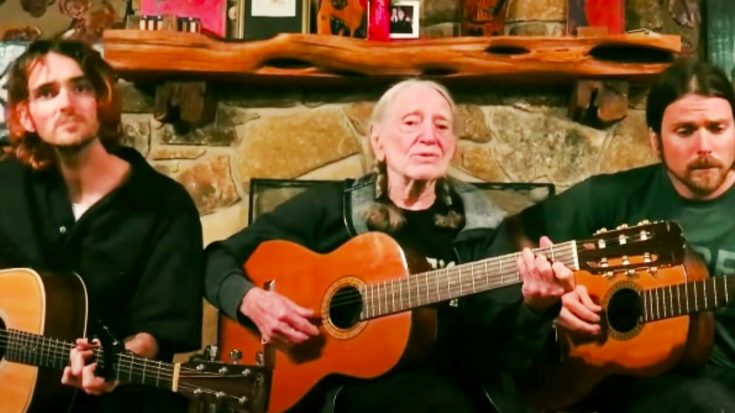 Willie Nelson and his sons have been leading the charge when it comes to keeping fans entertained during quarantine. They’ve shared multiple online performances over the course of the past couple months, as they’ve sat down to sing songs both old and new.

In celebration of 4/20, Willie put together a livestream musical event called “Come and Toke It.” He and his sons, Lukas and Micah, also shared a performance with Stephen Colbert. Colbert is currently filming The Late Show from home, and he shared the Nelson trio’s performance on the show’s official YouTube channel.

Willie, Lukas, and Micah opted to sing a song Willie wrote decades ago titled “Hello Walls.” The tune was a big hit for the late Faron Young, who released his recording in 1961.

Faron’s “Hello Walls” reached the top spot on the Hot Country & Western Sides chart and remained on the chart for an impressive total of 23 weeks. It was also a crossover success, and peaked at the 12th spot on the all-genre Billboard Hot 100 chart.

“Hello Walls” is often named as the song that first introduced Willie’s talents to the world. He later went on to record multiple versions of the song, his first being in 1962. A rock rendition featuring the band The Reverend Horton Heat was released in 1996.

Before Willie started singing “Hello Walls” with his sons at their home in Luck, Texas, he explained the story behind the song.

Speaking about Faron, who he called a “great friend,” Willie said:

“He made a little bit of fun out of the song. He would go around singing ‘Hello walls, hello commode’…he thought it was really funny. So we’ll dedicate the song to Faron Young.“

From there, Willie and his sons began singing “Hello Walls,” with Willie starting out on lead while Lukas and Micah sang backup. Everyone then took turns singing the lead before everything circled back to Willie by the end of the song.

Tune in to the clip below to watch Willie, Lukas, and Micah deliver their quarantine cover of “Hello Walls.” The family that plays music together, sticks together!

Remember When June Carter Played A Saloon Girl In…

Where The Cast Of “Little House On The Prairie”…