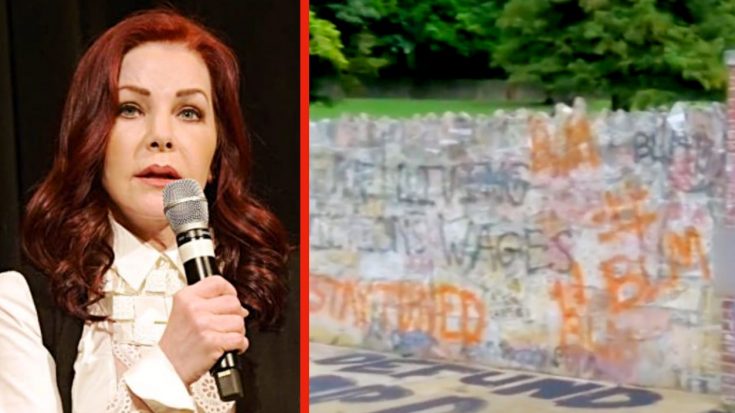 Overnight on August 30, 2020, the walls surrounding Elvis Presley’s Graceland estate were vandalized with graffiti. The vandalism occurred just days before 901 Day in Memphis.

901 is the area code in Memphis, so the city celebrates itself and its history every September 1.

Another famous Memphis landmark was also vandalized with graffiti overnight on August 30. That landmark was the Levitt Shell in Overton Park, which is about a 15 minute drive from the Graceland estate.

The Levitt Shell was the venue where Elvis played his first paid concert on July 30, 1954.

Here are some of the photos I just took of the graffiti at the Levitt Shell. pic.twitter.com/CO3zkukcbG

“We wake up, excited to celebrate our city on 901 Day, and we see our beautiful historic landmark defaced with messages of pain. And that breaks our heart. We’re brokenhearted and devastated by this,” Natalie Wilson, the executive director of the Levitt Shell, said in a statement quoted by Memphis news outlet The Commercial Appeal.

Graceland remained silent about the vandalism. Though on Thursday (September 3), Priscilla Presley shared her thoughts on the whole situation:

“Concerning the graffiti at Graceland, I’m absolutely horrified that those in our own city disgraced the walls surrounding Graceland,” Priscilla wrote on Facebook.

She went on to say how upsetting it was to see such behavior in Memphis. She also took the time to thank the workers who cleaned the graffiti off of the walls, saying they managed to get it all.

“I’m saddened by acts like this and appalled by this behavior,” she wrote. “We were able to clean all the graffiti off thanks to our dedicated crew.”

Concerning the graffiti at Graceland, I’m absolutely horrified that those in our own city disgraced the walls…

Priscilla is largely responsible for turning Graceland into the tourist attraction it is today.

The estate was temporarily closed to tours earlier this year but has now opened back up to the public. In November, it will host the Miss USA and Miss Teen USA pageants.