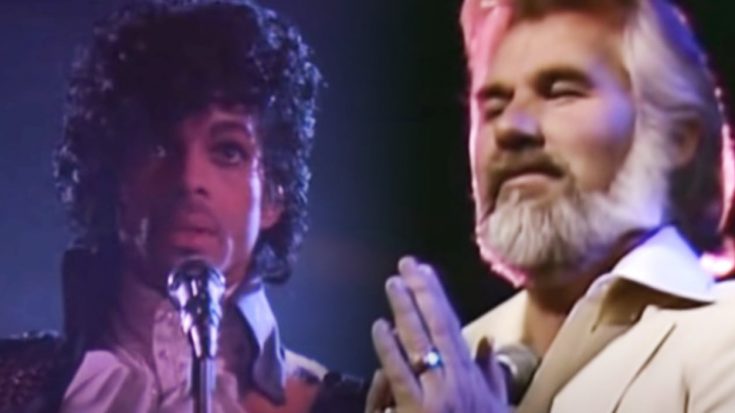 Many artists in the country community were shaken when they learned Prince had passed away at the age of 57 on April 21, 2016.

In addition to his work as singer, performer, and musician, Prince was also a talented songwriter with a surprising connection to country music.

As it turns out, Prince actually wrote a country song for one of the genre’s biggest stars…Kenny Rogers.

However, Prince wrote the song under the pseudonym “Joey Coco,” so his involvement in its creation was a complete secret. Prince also used a pseudonym for a song he wrote for pop artist Sheena Easton, and many songs for other artists that went unreleased.

The secret song Prince wrote for Rogers was titled “You’re My Love” and was featured as the fourth track on Rogers’ 1986 album They Don’t Make Them Like They Used To.

Kenny Never Got The Chance To Meet Prince…

As if the title isn’t enough indication, “You’re My Love” is a sweet love song, in which the narrator expresses his affection for his special someone, singing “All I know is I need you, more than I’ve ever needed anyone else before.”

Although Prince wrote a song for Rogers, the two artists never met. But as Rogers shared in a Facebook post after Prince’s passing, he “always wanted to” meet Prince one day.

I never had the privilege of knowing Prince, but I always wanted to. Back in the '80's, I had contacted him through a…

Rogers recalled when Prince sent him “You’re My Love,” and how he played all of the instruments and sang the background vocals on the recording he sent. Unfortunately, when Rogers re-cut the song, all of Prince’s original recording was lost, but Rogers will never forget the effort Prince put into creating the song for him.

“He was a brilliant guy and a gifted musician with a lot of feelings,” Rogers wrote, “and you could tell his feelings went far deeper than what was written on his face.”

You can listen to the secret song Prince wrote for Rogers, “You’re My Love,” in the clip below. May you rest in peace Prince. You are so sincerely missed.