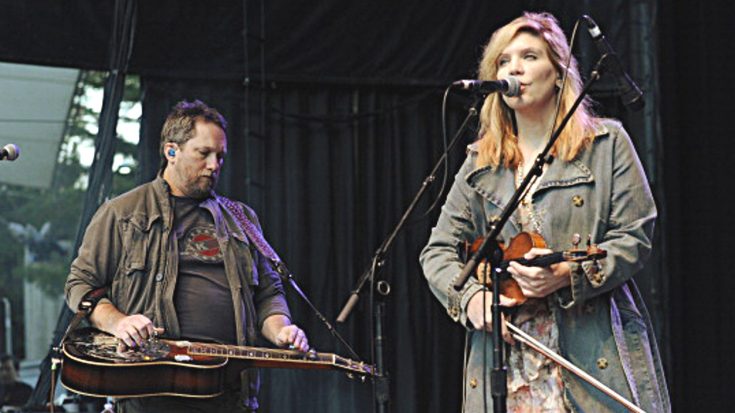 Out of the 13 studio albums Alison Krauss has released, six of them have been with her band Union Station. Together, Alison and Union Station have created outstanding country hits such as “Baby Now That I’ve Found You” and a remake of Keith Whitley‘s “When You Say Nothing At All.”

In the past, it hasn’t been the least bit unusual for Alison to record a solo album or different project before recording a new record with Union Station. But usually, she has never placed more than a few years between projects with them.

However, the past decade has seen a surprising shortage of material from Alison and Union Station. They collaborated on an album in 2011 titled Paper Airplanes, but that’s it.

It’s not that Alison and Union Station haven’t performed together in those seven years, because they have. It’s just that they haven’t hopped back in the recording studio to craft a new album yet.

Because of all of this, fans were thankful to hear that Alison and Union Station were recording a track for the new Johnny Cash tribute album, Johnny Cash: Forever Words.

The album takes poems, lyrics, and other unpublished writings from Cash and sets them to music, with the tracks being performed by a mix of classic and modern artists.

Alison and Union Station’s contribution to the album comes in the song “The Captain’s Daughter.” Once the album made its debut, the song became their first release together in seven years.

The wait was well worth it, because “The Captain’s Daughter” is a work of art. Johnny’s son and producer of the Forever Words album, John Carter Cash, spoke about how the song came to be.

As John Carter explained, he asked Alison to look over some of the lyrics his father wrote to see if any of them spoke to her. She found a lyric she liked, and worked with a songwriter to craft a song that became “The Captain’s Daughter.”

The resulting song is something that John Carter says “fits perfectly” with Alison’s personal style, while also paying perfect homage to his father.

Now it’s time for you to listen to a reunited Alison and Union Station on their new song, “The Captain’s Daughter,” in the clip below. If you love country music even just the tiniest bit, you’re sure to love this song.