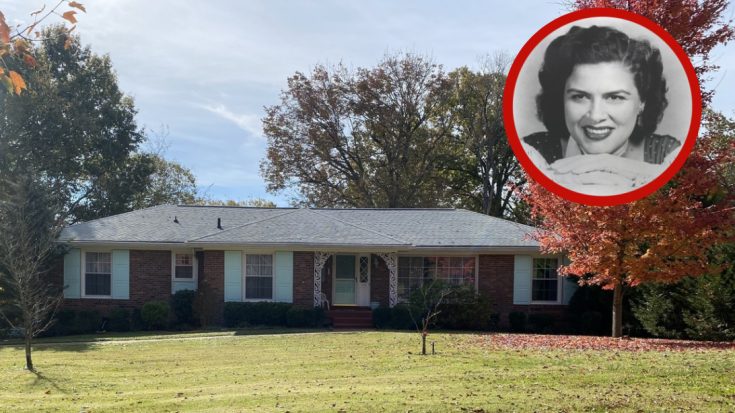 At the height of stardom, country legend Patsy Cline purchase a home in Goodlettsville, Tennessee, a move that the singer felt marked her success. Now the home has a new owner after selling for more than a half million dollars.

Cline reportedly use a $22,000 royalty check from Decca Records to make a down payment on the 2770-square-foot home. With 4 bedrooms and 3 bathrooms, Patsy and her husband hosted numerous friends at the home including Loretta Lynn, Dottie West, Johnny and June Carter Cash, and Brenda Lee. In 1963, less than a year after Cline took up residence in the home, the “Walkin’ After Midnight” singer died in a plane crash at the age of 30.

Cline’s widower, Charlie Dick, sold the home to singer Wilma Burgess following Patsy’s death. Burgess reportedly found money that Patsy had hidden behind a brick in the den fireplace a year after she moved in.

Burgess also believed that the house was haunted. In Honky Tonk Angel: The Intimate Story of Patsy Cline, Burgess said, “You’d be in an upstairs room, and the toilet downstairs would flush by itself…Doors would open and close by themselves.”

In November 2021, Patsy’s “dream home” was put up for sale and sold by the end of the year. At the time it was put on the market the home had been restored to what it looked like from 1965, including a bar counter that says “Patsy & Charlie.

According to Tom Courtois who owned the home since 2011, it took 3 years to restore the home to it’s retro glory. With some rooms donning four layers of wallpaper and original hardwood floors having been covered with carpet, Courtois had his work cut out for him, but the result was worth the effort. Within 10 days of being listed, the home had a pending sale. According to Redfin the home officially sold 3 months ago.

Take a peek inside Patsy Cline’s former home in the video below and see more photos HERE.