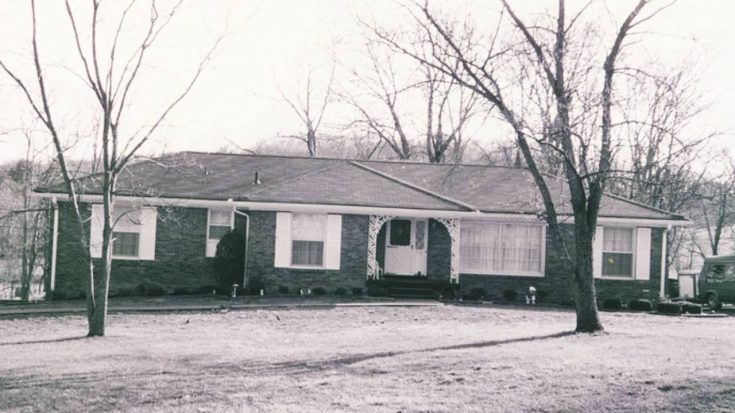 Over the years, many different country music landmarks have been deemed haunted.  There have been thousands of ghost sightings and claims that certain landmarks, venues, places are haunted.

Those places include Loretta Lynn’s ranch in Hurricane Mills, Tennessee, Johnny Cash’s plantation in Jamaica, The Ryman Auditorium, the Ernest Tubb Record Shop in Nashville, and even Elvis Presley’s Graceland. You can see more on this list.

One place that is not on that haunted list is Patsy Cline’s house. According to CMT, Patsy Cline and her husband, Charlie Dick, closed escrow on the house on May 23, 1962, less than a year before her March 1963 death.

Fans have seen the “dream house” in photos, including the one below of Patsy, Charlie and their kids Julie and Randy.

We even saw it in the Lifetime movie Patsy & Loretta. Part of the movie was filmed in the house, according to fan page Patsified!

Patsy carefully decorated the house with custom furniture and drapes, which barely arrived before her untimely death. The book Honky Tonk Angel: The Intimate Story of Patsy Cline revealed that many Grand Ole Opry stars came to the house to cook and clean for the family, all while Cline’s casket was in the living room.

Charlie eventually sold their house to singer Wilma Burgess, who believed the house is haunted. Speaking with the author of Ellis Nassour, author of Honky Tonk Angel: The Intimate Story of Patsy Cline, Burgess explained, “You’d be in an upstairs room, and the toilet downstairs would flush by itself. Doors would open and close by themselves.”

She also said that a year after she bought the house, she found money that Patsy had stashed in a brick. Creepy! Wilma sold the house several years later and it has gone through a couple different owners, all of whom have maintained the history of the house, with a lot of the same furniture Patsy left behind.

The fan page revealed on November 17, 2021 that the home was once again for sale. The page also said that one of the owners recently passed away, but they were wanting to put it on the market before that.

According to Zillow, the 4-bedroom, three-bathroom home is pending a sale for $549,000 and was listed on the market on November 10. Check out the listing here.