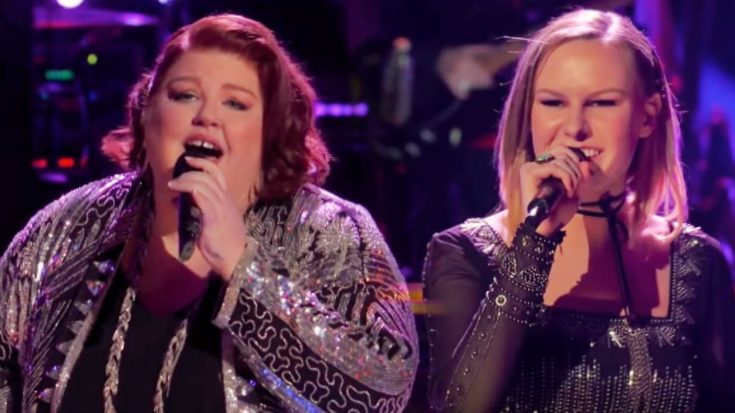 Kelly Clarkson was enamored with Mandi Thomas’ voice seconds after she stepped on stage for her Voice blind audition. The 33-year-old from Memphis, Tennessee started singing when she was just a child.

According to Thomas’ profile on The Voice‘s website, the Season 18 starlet began classical vocal training at the age of 11. She continued studying music in college, and went on to teach vocal lessons after she graduated.

After watching two of her students find success on The Voice, Thomas decided to chase her own musical dreams by auditioning for the show. She performed Andrea Bocelli & Sarah Brightman’s “Time to Say Goodbye,” an operatic pop song that requires some serious pipes to pull off.

The classically trained Thomas proved she has those pipes, and impressed all of the Voice coaches with her audition. Still, only Clarkson was courageous enough to turn her chair for Thomas, and she landed on her team.

For the battles, Clarkson paired Thomas with 18-year-old country singer Sara Collins. Since opera isn’t something she could just throw Collins into, Clarkson challenged Thomas to try a country song.

Thomas was up to the challenge, saying she enjoys country music. But to the viewers, it appeared as though this was Collins’ battle to win, since country seems so far out of Thomas’ wheelhouse.

McBride’s recording of “My Baby Loves Me” went on to reach the second position on the Hot Country Songs chart in the U.S.

The song is fun and full of attitude, so it gave Collins and Thomas ample opportunity to show off their personalities on stage.

Even though country isn’t Thomas’ “home” genre, she managed to hold her own throughout the battle. In fact, it was actually Collins who faltered a bit, with Blake Shelton commenting that she went for a few notes she wasn’t able to hit 100%.

And there was no denying the fact that Thomas brought her A-game to the performance. She fully embraced the character of the song, and made it clear she was up to the challenge of tackling an unfamiliar genre.

In the end, Clarkson chose Thomas as the winner of the battle, and Collins was sent home. Tune in below to see how their performance played out.

An opera singer performing country music? Y’all know you have to see this!