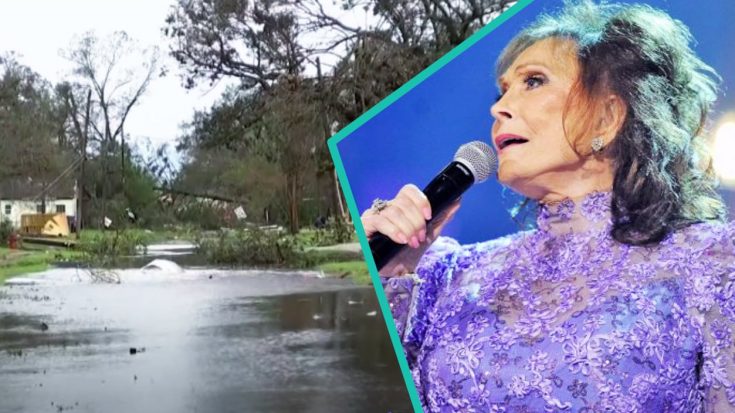 The Weather Channel reports that Hurricane Laura made landfall around 1 AM on Thursday (August 27). The storm left immense devastation in its wake, destroying numerous structures and leaving over 900,000 homes and businesses without power.

While Texas, Arkansas, and Mississippi were all affected by the storm, Louisiana was hit the hardest. The six known deaths caused by Laura were all in Louisiana.

The Weather Channel references Louisiana Governor John Bel Edwards, who said four of those six people were killed by falling trees. Another died due to carbon monoxide poisoning from running a generator in his home, while the sixth person drowned after their boat sank in the storm.

Hurricane #Laura will go down in history as the most powerful storm to ever make landfall in Southwest Louisiana.

Country singers have taken to social media to show support for those who have been affected by Hurricane Laura. Darius Rucker shared a picture of one of the ruined houses, and wrote, “My heart goes out to those impacted by #HurricaneLaura.”

American Idol winner and Louisiana native Laine Hardy let fans know he was safe and that the storm hit west of his town.

“Me & my family are safe & we’ve not had any damage,” he said. “Many others here in Louisiana can’t say the same.”

Thank you all for the prayers & messages. Hurricane Laura hit west of my hometown. Me & my family are safe & we've not had any damage. Many others here in Louisiana can’t say the same. If you need shelter, @RedCross can help. Call 1-800-RED CROSS or visit https://t.co/JoxW1UnTnR.

Loretta Lynn was another country singer who shared comforting words for those affected by the storm. Speaking of her #1 duet with Conway Twitty, “Louisiana Woman, Mississippi Man,” she wrote:

“In our hit song, I was always a Lousiana [sic] woman and he was a Mississippi man. Tonight, my heart goes out to all my fans in Louisiana and in Laura’s path.“

The 88-year-old country music legend then spoke of all the hardships we’ve had to face in 2020. But she ended her message on a hopeful note:

Look below to read Lynn’s full note to those impacted by Hurricane Laura.

In our hit song, I was always a Lousiana woman and he was a Mississippi man. Tonight, my heart goes out to all my fans in Louisiana and in Laura’s path. I wish she and all the other troubles of 2020 would leave us be. Hang tight, y’all. We’ll make it through! #louisianawoman #prayforlouisiana #over2020

We too, join Lynn in praying for the people affected by this destructive storm.

Tune in to the below news report to see some of the damage Laura caused in Louisiana.