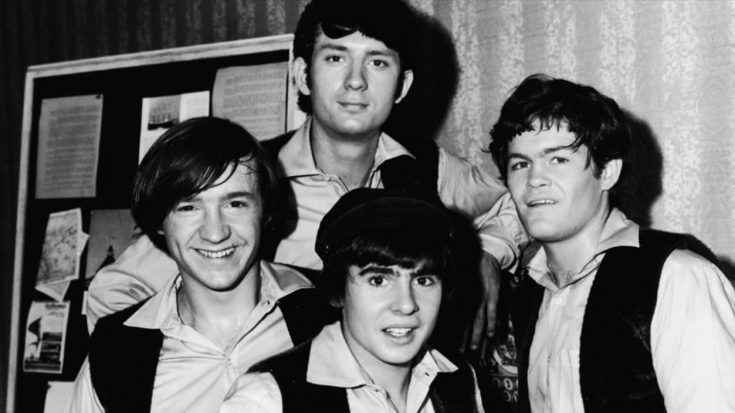 The devastating news of his passing was announced just hours ago on social media and has left the world of music in deep mourning – and our hearts are broken too.

The legendary group – known worldwide – have become a timeless musical force that has persevered decades of changes to become one of the only hitmakers to maintain an everlasting presence in pop culture.

Today in 1966, NBC aired the first episode of The Monkees. By 1967, the band outsold both The Beatles and The Rolling Stones. pic.twitter.com/v9VqzbWnGE

The Monkees, comprised of Davy Jones, Micky Dolenz, Michael Nesmith, and Peter Tork began their meteoric rise to fame in 1966 with the formation of the television series The Monkees. The series was billed as a sitcom that followed four young men trying to make it as a rock ‘n roll band in the late 60s.

Tragically, the passing of founding member Peter Tork on February 21st, 2019 was announced on his official social media accounts with a heart-wrenching message from his family.

RIP Peter Tork, 77, a real musician who became a member of The Monkees (second from the left) pic.twitter.com/VcQd4FAxSF

This funny and talented group of young fellas worked for two seasons on their show until they became tired of the repeated scripts that they felt were stale. Tork was open to working on a third season with some changes, while the others weren’t as keen on the idea.

Over the next several years, the group continued to record music and at one point even outsold The Beatles – a feat that has always been considered absolutely remarkable.

Tork played bass and keyboard for the group while also giving lead vocals for tracks like “Your Auntie Grizelda” and “Long Title: Do I Have To Do This All Over Again.”

A lot of the band’s early material was written by now-legendary musicians like Carole King, Neil Diamond, Bobby Hart, and Neil Sedaka among many others.

Probably the most-recognizable songs from the group’s tenure are “I’m a Believer,” “Last Train to Clarksville,” and “Daydream Believer” – but they are known for a whole host of wonderfully good songs.

Tork, who left the band in 1969 after the release of their movie “Head” which was co-written by Jack Nicholson and deemed a flop.

In the Facebook post on his official page, his loved ones opened up about the 77-year-old and asked for privacy as they grieve the loss. He had been battling a rare tongue cancer for some time, but they did not state the exact cause of his death.

It is with beyond-heavy and broken hearts that we share the devastating news that our friend, mentor, teacher, and…

Posted by The REAL Peter Tork (Official) on Thursday, February 21, 2019

Our thoughts and prayers are with all of his family, friends, and fans during this very difficult time.