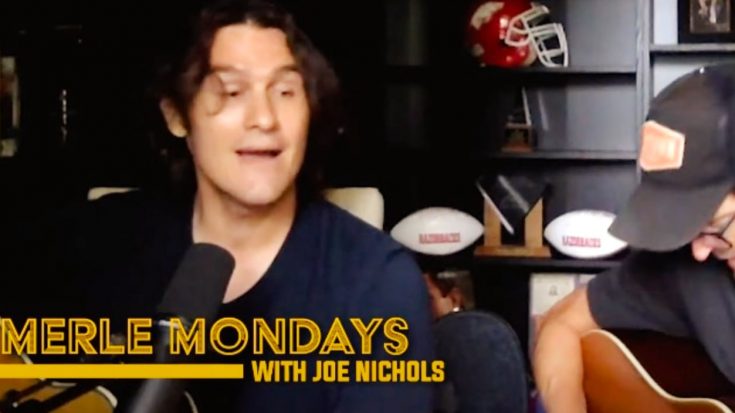 If you follow Joe Nichols on social media or have subscribed to his YouTube channel, then you’ve noticed how much appreciation he has for Merle Haggard. This appreciation can be seen in the cover videos he posts as part of a weekly series he has dubbed “Merle Mondays.”

Some of the songs Nichols has covered for “Merle Mondays” include “Silver Wings,” “My Favorite Memory,” and “Today I Started Loving You Again.”

Instead of singing some of Haggard’s major hits such as “Mama Tried” and “Okie from Muskogee,” Nichols picks deep cuts and lesser-known songs for “Merle Mondays.” One such song song Nichols shared was “Little Ole Wine Drinker Me.”

Originally titled “Little Old Wine Drinker Me,” the song was first released by country artist Charlie Walker in 1966. Robert Mitchum and Dean Martin each covered the song in 1967, and both of their renditions were big hits.

Martin’s version was the most successful of the two. His recording spent six weeks on the Billboard Hot 100 chart and peaked at the 38th position. It also claimed the fifth spot on Billboard’s Easy Listening chart.

Haggard later went on to record the song, though his version was never released as a single.

Even though Haggard is not known for singing “Little Ole Wine Drinker Me,” Nichols ended up being exposed to his version of the song. And he liked it enough to cover it for his “Merle Mondays” series!

Nichols joined his friend Brian to deliver his cover of “Little Ole Wine Drinker Me.” Instead of singing with a backing track, Nichols delivered his performance acoustically, and Brian chimed in every now and then to contribute some harmony vocals.

We think Nichols’ performance would have made “The Hag” proud. Tune in to the clip below to check it out.

Which one of Haggard’s songs would you like to hear Nichols sing next? There are so many good ones to pick from!