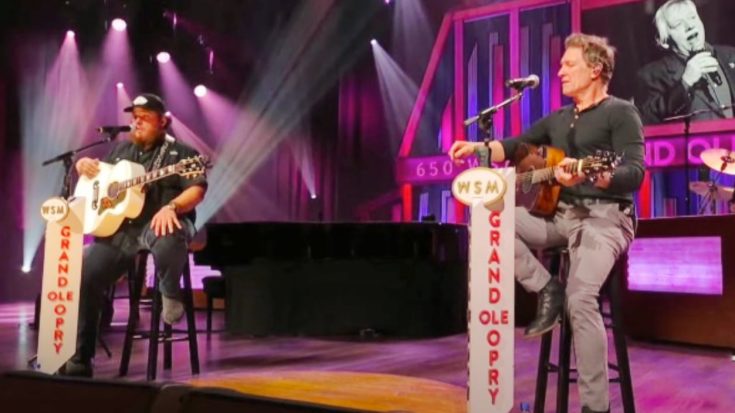 The Grand Ole Opry may not be open to the public right now, but the Saturday night shows continue. On April 26, Luke Combs and Craig Morgan came together (while sitting apart) on the Opry stage to deliver a show that entertained and touched all who witnessed it.

If you missed last night’s show, or like us, you want to watch it again, head to the link in our bio for the encore on @circleallaccess!

The pair took turns singing some of their biggest hits. Combs performed “Hurricane,” “Beautiful Crazy,” and “When It Rains It Pours,” while Morgan sang “That’s What I Love About Sunday,” “International Harvester,” and his new song about the loss of his son, Jerry, titled, “The Father, My Son, and the Holy Ghost.”

At the end of their set, Combs and Morgan teamed up to sing a cover in honor of a country legend and fellow Opry member…John Conlee. They opted to sing his 1978 single “Rose Colored Glasses,” which was a Top 10 hit on the Hot Country Songs chart.

“This song in particular is what got me into country music,” Morgan said as he introduced “Rose Colored Glasses.”

He then dedicated his and Combs’ performance to Conlee and other country greats, saying:

“I’d like for us tonight to close this show paying tribute to those men, and women as well, who have paved the way for us to be here tonight.”

“I would love to do that,” Combs responded before they started to sing.

Combs took the lead first and sang on his own for a while before Morgan joined in. He also got his own chance to sing a solo before the pair reunited a little later in the song. They ended with Morgan singing solo again as he put on his best impression of Conlee’s voice.

You can watch Combs and Morgan’s remarkable cover of Conlee’s “Rose Colored Glasses” in the video below. They start their performance around the 55:30 mark in the video.

This is one Opry performance we won’t forget any time soon, that’s for sure.