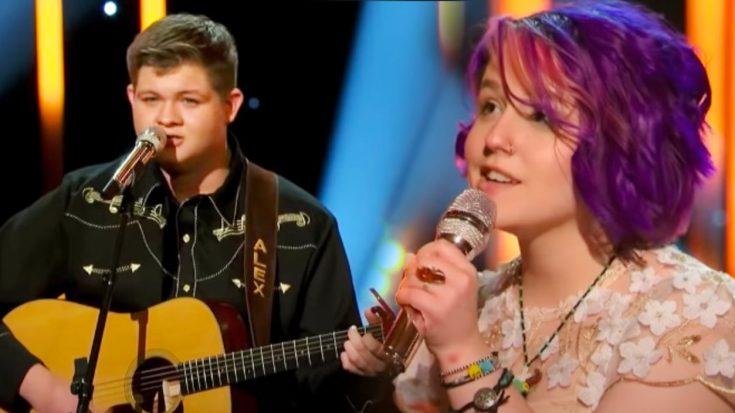 Two young contestants on the 2021 season of American Idol proved why it sometimes pays off to follow your gut.

Teenage country singers Alex Miller and EmiSunshine both captured the attention of the judges during their respective auditions. They were given golden tickets to Hollywood, where they once again performed to prove their talents to Lionel Richie, Luke Bryan, and Katy Perry.

During Hollywood week, the Idol hopefuls are paired up for duet performances. Since the singers don’t get to pick their partners, they can sometimes end up performing with someone whose style clashes with their own. But other times, they’re paired with a duet partner who is their perfect complement.

Such was the case with Alex and EmiSunshine, who are both country through and through. They planned to sing Johnny Cash‘s “I Walk the Line.”

But before their performance, Luke actually encouraged the duo to think about choosing a different song. Despite his encouragement, they stuck with their original plan, and sang “I Walk the Line” anyway.

Much to Luke’s surprise, he ended up enjoying the performance. He showered Alex and EmiSunshine with praise, saying:

“Well, I wanna give you guys kudos. You were getting pushed back on ‘Walk The Line’ because ‘American Idol’ wouldn’t do you any good if we don’t push you.”

The other judges were equally impressed with what they heard from Alex and EmiSunshine. Both of them advanced to the next phase of the competition!

“So, with all that said, country little bumpkins, you’re going through to the next round… both of you,” Luke happily told the singers, who jumped for joy in celebration.

Tune in to the video below to see how Alex and EmiSunshine’s duet unfolded. Props to them for sticking with the song they felt confident performing!