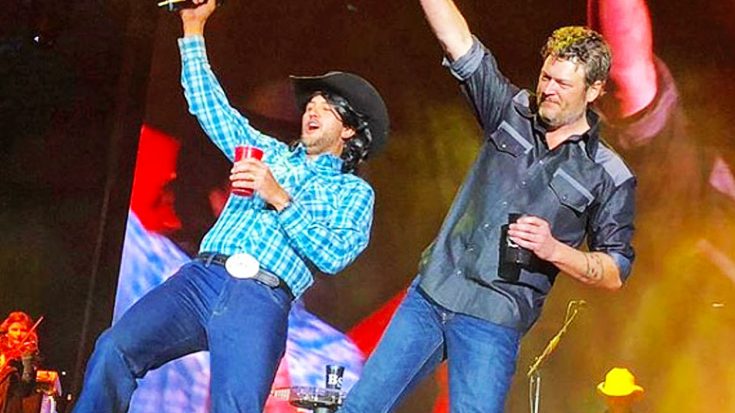 In January 2018, country fans from all over the globe jetted to Mexico to enjoy what is arguably the biggest party in all of country music. That “party” was none other than Luke Bryan‘s annual Crash My Playa festival.

Bryan managed to get one of his best buds to headline the next to last night of the festival. That friend just so happened to be Blake Shelton, who jumped in to his headlining set following performances from Brooke Eden and Dustin Lynch.

Even though Bryan wasn’t one of the scheduled performers that night, he still ended up taking to the stage. Since he always enjoys poking fun at Shelton, and vice versa, Bryan decided to don some interesting attire before he joined his friend on the stage.

Bryan thought it would be fun to dress as an old-school version of Shelton, and he went all-out with his outfit. He even got a long wig to resemble the mullet Shelton used to sport!

But as much fun as Bryan had putting together his outfit, he seemed to get even more enjoyment out of sharing the stage with Shelton.

The two of them performed a series of classic and traditional country tunes, including one that all country fans are guilty of singing at the top of their lungs…George Strait‘s “All My Ex’s Live in Texas.”

Released as a single in 1987, “All My Ex’s Live in Texas” is one of Strait’s many number one hits. It is also one of his most recognizable songs, and is known even by those who don’t consider themselves fans of country music.

Those who are fans of country music know how much fun it is to sing “All My Ex’s Live in Texas,” and Bryan and Shelton clearly had a good time singing it at Crash My Playa. The two took turns singing the verses, then teamed up to tackle the chorus together while the crowd enthusiastically sang along.

You can catch a video of Bryan and Shelton’s performance below. Watching it will make you wish you had been there to see it happen live!