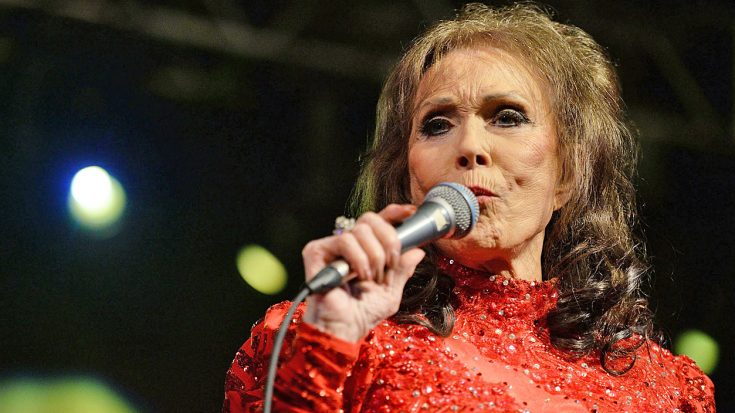 Those who planned to attend Loretta Lynn‘s upcoming concert at the famous Hard Rock Hotel & Casino in Tulsa, Oklahoma learned some unfortunate news on Wednesday morning (January 31). Lynn was was set to perform at The Joint inside the hotel and casino on May 17, but has now been forced to cancel that show.

Lynn’s management provided a statement to explain the reason for the cancellation, and that statement was shared on the Discover Green Country Facebook page. The page shares regular updates about events in Green County and the area around Tulsa.

“Due to circumstances beyond our control, the Loretta Lynn date, scheduled May 17, 2018, in Tulsa has been canceled,” the statement read. “Refunds are available at point of purchase.”

While the specific reason for the cancellation wasn’t mentioned, it’s likely because Lynn fractured her hip after suffering a fall at her Tennessee home in early January. While Lynn herself said through a short statement that she is “doing well,” she surely needs some time to recover.

This is the second time Lynn’s show as the Hard Rock Hotel & Casino in Tulsa has been affected. She was originally slated to perform there on June 23, 2017, but had to reschedule that performance to the May 2018 date. The reason she rescheduled that original show is because she suffered a stroke in May 2017 and needed time to regain her strength.

Lynn performed for the first time since her stroke during the Tennessee Motorcycle and Music Revival at her ranch in Hurricane Mills, Tennessee. She has made few public appearances since then, though she was on hand to help induct Alan Jackson into the Country Music Hall of Fame.

The performance at the Hard Rock was the only show that Lynn had scheduled for 2018 so far. Based on the statement from her team, it appears that it will not be rescheduled.

We’re sorry to hear that Lynn had to cancel her show, but we want her to take all the time she needs to focus on her health. We’re praying for her continued recovery.