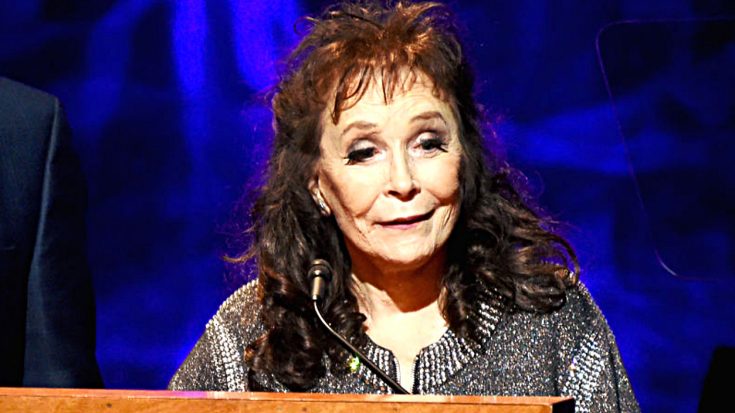 In January, Loretta Lynn suffered a nasty fall at her home in Hurricane Mills, Tennessee. She fractured her hip as a result, which required plenty of rest and recovery.

Since then, Loretta, her team, and family have kept fans informed with regular updates about her health. She has remained in good spirits, but has understandably had to pull back from making public appearances.

Later in January, Loretta’s team announced that she would be canceling her only performance date scheduled for 2018. That performance, which was set to take place at the Hard Rock Hotel & Casino in Tulsa, Oklahoma, was scheduled for May 17.

“Due to circumstances beyond our control, the Loretta Lynn date, scheduled May 17, 2018, in Tulsa has been canceled,” read the statement.

Of course, everyone assumed those circumstances had to do with Loretta’s injury and the time needed to recover.

Now nearly three months after her fall, Lynn is plotting the release of a future album and is hopeful for big things to come. Unfortunately, it will probably be a bit longer until she makes another public appearance.

On Tuesday (March 27), Loretta shared an important message with her fans through a short note on Facebook. She wrote about an upcoming tribute show at her ranch, which will be headlined by her granddaughter, Tayla, and Conway Twitty‘s grandson, Tre.

Of course, Loretta wanted to promote the event. But she also wanted to let her fans know that she would unfortunately be unable to attend.

“I wish I could be there but these two will sing their hearts out for all of yall (sic). Love you all!” she wrote.

But Loretta also made it clear that she misses performing and seeing all of her fans. That makes us hopeful that maybe she’ll get back to it once she starts feeling better.

Dear Friends,I sure miss being out on the road singin' for all of yall. My granddaughter Tayla will be doing a show…

Even though Loretta can’t make it to the tribute show, those who attend are in for the concert of a lifetime. Tayla and Tre make their grandparents proud every time they sing their songs. Catch a snippet of them singing “You’re the Reason Our Kids Are Ugly” below.

We hate that Loretta is unable to go to the concert, but we understand that she needs her rest!