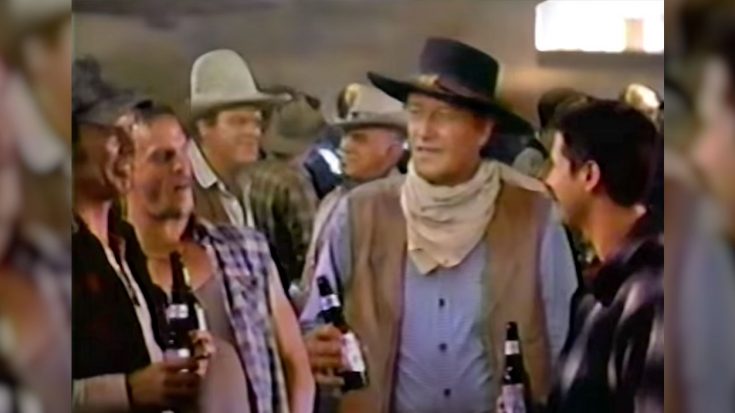 In a throwback commercial for Coors Light, two of TV’s most beloved westerns collide to give you one of the best beer commercials ever. John Wayne and the cast from Bonanza team up for the commercial back in the 1990s. In order to create the commercial, old footage of the actors was taken and inserted into the scenes where they appear.

The commercial starts out with two rather large, intimidating characters walking into a bar and sitting down in a couple of seats with cold beer waiting to be downed. The barkeeper cautions the two saying, “I gotta warn you boys those seats are taken.”

The two disrespectfully sit down and begin pouring the beer into their glasses when a voice behind them speaks up, “Uh excuse me, those are our beers.”

One beer thief responds, “Who do you think you are? John Wayne?”

Suddenly a familiar voice appears offscreen, “No. That would be me.” John Wayne walks into view as the man cowers in disbelief.

The poor man who had his beer stolen replies, “No. He’s over there.” The camera pans to the other side of the bar where the infamous Ben Cartwright is standing, along with the rest of the Bonanza cast.

The two beer thieves hastily offer to buy everyone in the bar a Coors Light. “Coors Light for the house!” one of them shouts.

Watch the commercial in the video below.