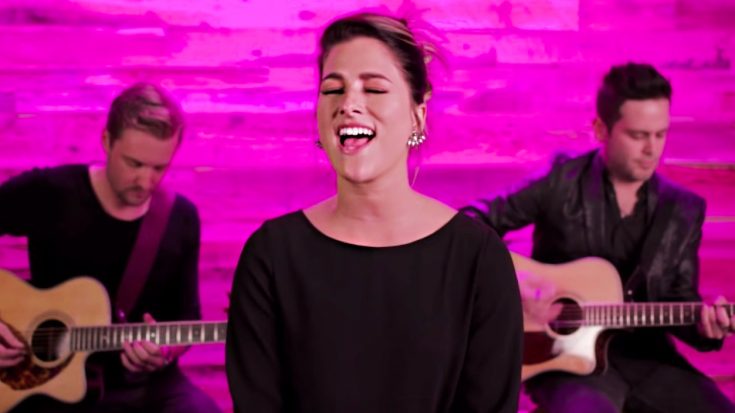 Back in December 2012, Cassadee Pope became the first female artist to ever win The Voice. A member of Blake Shelton‘s team, the former rock band frontwoman completely changed course and devoted herself to a solo career in country music.

Cassadee Pope's win on Season Three of #TheVoice was made possible with help from iTunes chart hits: http://t.co/36Nkkrqa

Pope was on Season 3 of The Voice, and may more seasons have passed since then. Still, Pope arguably remains the most successful winner in the show’s history, and also one of the most beloved.

Since winning The Voice, Pope has taken a number of singles onto the charts, including “Wasting All These Tears” and “I Wish I Could Break Your Heart.” Her 2016 collaboration with Chris Young, titled “Think of You,” reached number one on the Country Airplay chart and was nominated for a Grammy Award.

After all this time, Pope continues to prove why she won The Voice.

“Dancing” Through A Cover Performance

Over the past few years, Pope has become quite familiar with performing on the famed stage of the Grand Ole Opry. Prior to one of her recent shows, she took some time backstage to reflect on and sing one song that has influenced her tremendously.

The song is known far and wide for its inspirational message and Womack’s gorgeous delivery.

Since it has such a strong reputation, “I Hope You Dance” is a favorite song for other artists to cover. However, it’s also tricky to tackle. Since it’s such a treasured track, listeners can tend to be hard on anyone who tries to take on Womack’s signature song.

Prepare To Be Enchanted

But we think it would be impossible for you to listen to Pope sing this without getting goosebumps. As she proved during her time on The Voice, she knew exactly how to tap into the song’s emotions and bring those through in her performance.

So the connection was definitely there, but how did her voice sound on it? It turns out that the song was a perfect fit for Pope’s voice, which sounded especially dazzling on the many high notes she had to hit.

Those factors combined to result in a performance that is sure to be a treat to your ears. Go ahead and check it out in the video below.

It’s obvious that Pope was born to sing country music!