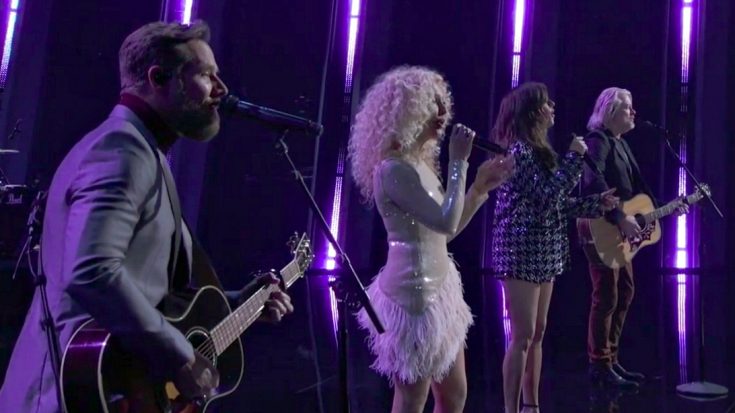 Kenny Rogers was honored during Wednesday night’s CMA Awards. Rogers, who died in March at 81, was remembered with a touching performance by Little Big Town.

Little Big Town’s performance during the CMA Awards wasn’t the first time the group paid tribute to Rogers. The award-winning quartet sang “Through The Years” at the “All in for the Gambler: Kenny Rogers’ Farewell Concert Celebration” in 2017.

In a clip from the 2019 Kenny Rogers documentary, Little Big Town was filmed as they prepared for their “All in for the Gambler” performance.

“He’s done everything,” Karen Fairchild said. “Then to go on and be Entertainer of the Year and to be on pop radio. He really made us all so proud in country music. He was like the shining light of all the things we could become.”

“All in for the Gambler” was a memorable night where many of music’s biggest names from different genres gathered to remember some of Rogers’ biggest hits. In addition to Little Big Town, the Judds, Lady A, Reba McEntire, Chris Stapleton, Alison Krauss, and Idina Menzel joined the party. But, perhaps one of the most memorable performances from the farewell concert came when Kenny joined his longtime friend and duet partner Dolly Parton for a final duet of “Islands in the Stream.”

Rogers, a five-time CMA award winner, made an indelible impact on country music so it was only fitting that he was honored during Wednesday’s CMA Awards show. Watch Little Big Town’s tribute to Kenny Rogers below.