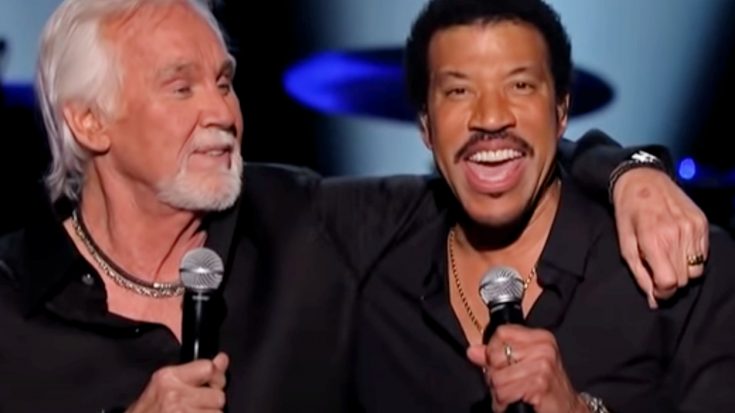 Lionel Richie and Kenny Rogers were some of the best of friends — so close, in fact, that Rogers didn’t want one of his epic Fourth of July BBQs to go on until Richie was in attendance.

Rogers requested that Richie join him for his annual Independence Day party at his vast estate in Georgia. Sadly, Richie had to turn him down, as he was already having his own celebration with his parents in nearby Alabama.

Not one to take “no” for an answer, Rogers decided to call in the big guns in order to get Richie to his party — in the form of a helicopter. While Richie was enjoying his celebration in Tuskegee, Alabama, a chopper was soon flying overhead to take Richie and his parents to join Rogers in Georgia.

As Richie recalled to ABC News:

“He said, ‘No, Lionel, I want you to come up here because we’ve got a great barbecue.’ I said, ‘No, no, Kenny, I’ve got it all down here. I’m gonna miss it this time, but I’ll see you next [time]’…Next thing I know, a helicopter is flying over the top of my house with my mom and dad in the helicopter. He came down, picked me up, carried us all back to the farm in Georgia. We had part of my barbecue in Alabama and the rest of the barbecue at his farm in Georgia.”

Rogers passed away in March of 2020, and Richie has spoken about his favorite memories with his friend. Richie says that one of the most memorable things about Rogers was his tenacity and can-do attitude, which helped him to overcome the adversity he faced early in life.

Beautiful photo of two music greats. My favorite song by Kenny Rogers was Lady, written by Lionel Richie. Such a timeless classic. Rest in paradise you silver Fox! ??❤️ pic.twitter.com/Fcsx2MwDw4

The friendship between Rogers and Richie spanned nearly half a century, and Richie says that one of the things he’ll always remember about Rogers is how he kept a smile on his face, no matter what.

Watch this amazing performance of “Lady” by both of them below.