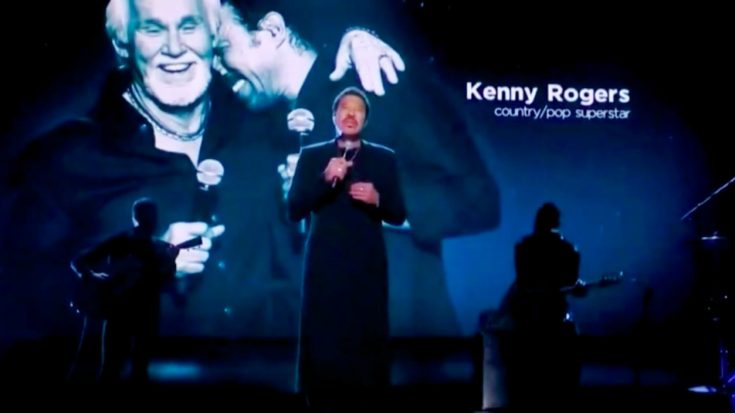 Lionel Richie and Kenny Rogers‘ friendship sprung out of a collaboration. Richie wrote the song “Lady,” which Rogers recorded and turned into a crossover hit in 1980. The song topped both the Hot Country Songs chart and the all-genre Billboard Hot 100.

Richie and Rogers remained close friends in the decades that followed. In 2012, they re-recorded “Lady” as a duet for Richie’s album Tuskegee. They later performed the song together live during the Lionel Richie & Friends concert special.

After being friends for so many years, Richie was understandably devastated when Rogers passed away on March 20, 2020 at the age of 81.

After Rogers’ passing, Richie shared a series of photos showing him and Rogers during various phases of their lives. “Today I lost one of my closest friends,” he wrote in the caption.

Richie reflected on the memories he and Rogers made together, saying, “So much laughter so many adventures to remember, my heart is broken.”

Since Rogers played such a huge role in influencing and inspiring other artists, the Recording Academy made sure he was honored during the 2021 Grammy Awards. The ceremony included an “In Memoriam” segment to pay tribute to those who passed away in the previous year, including Little Richard and John Prine.

When it came time to honor Rogers, it was Richie who took to the stage to sing. And of course, he performed “Lady.”

At the end of his performance, an emotional Richie spoke to his longtime friend, saying, “I miss you, Kenny. I miss you, man.”

Taking to social media after the tribute, Richie wrote:

“Singing this song at the #Grammys tonight, without Kenny there, was incredibly hard.”

You could feel Richie’s heartbreak as he sang “Lady” in tribute to Rogers at the Grammys. He misses his friend dearly, and it shows.

Tune in to the video below to watch a recap of the entire “In Memoriam” at the 2021 Grammy Awards. The video includes some photos and a short clip from Richie’s performance honoring Rogers.

Then, look below to watch Richie’s portion of the performance where he sang “Lady” in honor of Rogers. Don’t be surprised if it ends up bringing tears to your eyes.

Richie was the perfect person to deliver this tribute to Rogers.