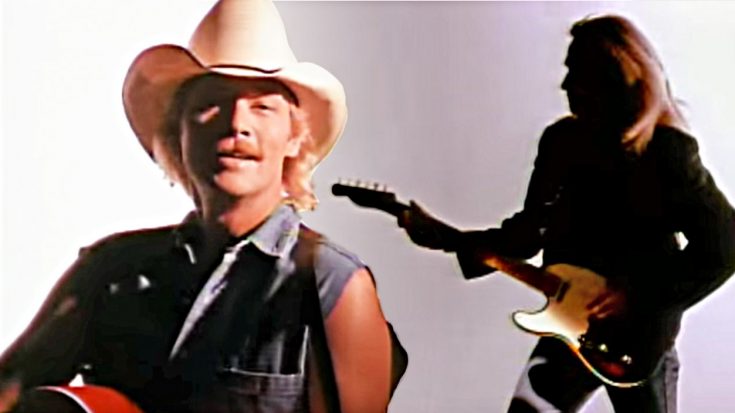 Almost 25 years ago, when country megastar Alan Jackson was soaring high across the charts and racking up hit after hit, Keith Urban was fighting for his chance to make it big as well – and fate put the two together!

Known as a world-class guitarist and having proven his skills for fans time and time again, Keith Urban was just looking for a way to catch the music industry’s attention and earn a solid deal out of it, so when he got the opportunity to play guitar in a music video for Alan Jackson, he jumped at it.

“I got these odd jobs, Alan Jackson was shooting a video for this song called ‘Mercury Blues’ and needed a long-haired guitar player to come in and be in this video,” Urban said in a 2011 interview. “I signed with this publishing company, and the guy who ran the company was Alan’s manager.”

The music video for “Mercury Blues” only shows Urban in a few scenes jamming out and playing guitar alongside Jackson, and it’s hard to tell that it’s him – partly due to the very-90s lighting effects and his wildly long hair.

“I’m this scrawny, long-haired, Aussie kid. I’d been in town two years and like oh my God, I’m gonna be on set with Alan Jackson. This is amazing, what a great career boost for me. I can’t wait to meet Alan,” Urban continued. “He never said anything to me.”

Years later, after Urban had earned his own in the country music industry and become a chart-topping sensation himself, the two eventually ended up on stage together – and played during the All For The Hall Benefit in 2010!

Check out this amazing blast from the past below and let us know what you think in the comments!