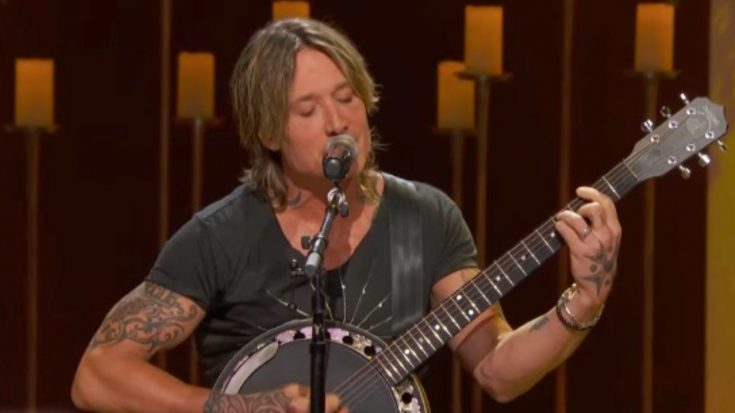 When Loretta Lynn passed away on October 4, Keith Urban was one of many artists who paid tribute to her on social media. He spoke about how influential Lynn was, saying:

“It’s hard to quantify what she brought not only to country music, but to millions of people everywhere. A voice that was needed. Subjects and themes nobody else would dare write and sing about. She did it. I’m profoundly grateful for the all too brief time I got to spend with her. Blessings to you and your eternal light Miss Loretta and to all of your family and friends.”

Urban and Lynn shared a special bond. He was her date to the 2005 CMT Music Awards. 14 years later, he gladly popped out of Lynn’s 87th birthday cake when she made it known she would love for him to do so.

On Sunday (October 30) a service honoring Lynn’s life and legacy was held at the Grand Ole Opry house in Nashville. The service was open to the public, and was also broadcast live on CMT.

Urban was one of the artists who participated in the tribute. He had the honor of singing one of Lynn’s most iconic songs, “You’re Lookin’ At Country.”

Lynn released “You’re Lookin’ At Country” in 1971. The song peaked at the fifth spot on the Hot Country Songs chart and was a number one song in Canada.

Urban performed “You’re Lookin’ At Country” without a band to back him up. He did have some instrumental support from his banjo, which he gently plucked while he performed.

When CMT later shared the video of Urban’s performance, they said, “[He] did Loretta Lynn proud with this take on ‘You’re Lookin’ At Country.‘” We completely agree.

Head below to watch Urban sing “You’re Lookin’ At Country” during Lynn’s memorial service. His tribute came straight from the heart.