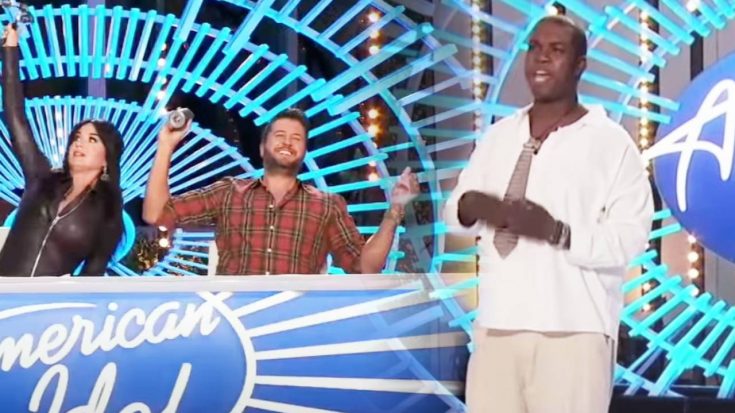 On February 27, American Idol’s 20th season kicked off on ABC with host Ryan Seacrest at the helm and judges Lionel Ritchie, Katy Perry, and Luke Bryan returning as judges for the fifth year.

For several weeks, we’ve seen countless audition – many of them country! – and the talent this season is off the charts!

On the Sunday, March 20th episode, 23-year-old Kevin Gullage revealed he was inspired by William Hung, who is more infamous for his American Idol appearance in 2004. Despite being a terrible singer, he had charisma and went on to record cover albums and become somewhat of a sensation.

So when he said that, we were a little nervous but the moment he opened his mouth, our nerves were gone. Sitting behind the piano, Gullage accompanied himself in performing “That’s How Strong My Love Is,” originally by Otis Redding.

The judges clearly loved his performance and all wanted to put him through to the next round, but did ask for something else…especially since he had given them all some fun percussion instruments. He told them they were going to have some “Louisiana fun”  as he put on a washboard shaped like a tie that clipped on to his necklace.

The judges each played a tambourine, egg shaker, and cowbell as Gullage sang the opening lyrics to Hank Williams’ “Jambalaya.”

See his full audition below.