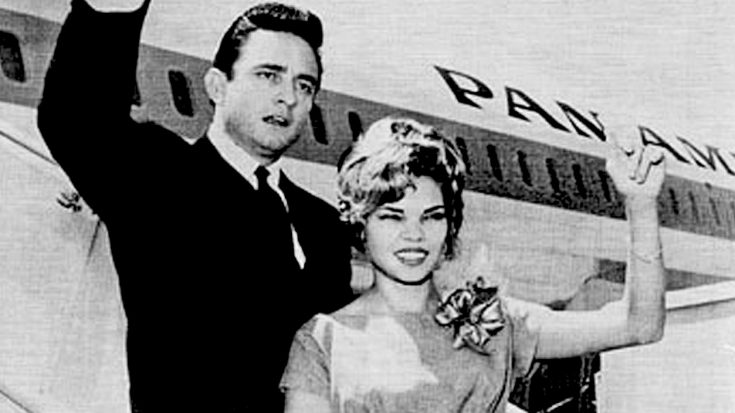 Johnny and June Carter Cash are often considered to be the most iconic couple in country music history.

Because of that, many people forget or simply don’t know that Johnny was married once before.

Vivian Liberto married Johnny on August 7, 1954, after spending three years exchanging letters with him while he was in the military and stationed in Germany. The couple went on to have four daughters together, Rosanne, Kathy, Cindy, and Tara.

But the marriage was far from a happy one, and Vivian filed for divorce in 1966, after just 12 years of marriage. Although Vivian passed away in 2005, her new book called I Walked The Line: My Life With Johnny, tells her story.

Vivian says the two main things that destroyed her marriage to Johnny were “drugs and June Carter,” more so June than the drugs.

She says that “everything, and I mean everything, started to fall apart,” when they lived in a house in Casitas Springs from 1961-1967. That is when Johnny got the most out of control with drugs and alcohol, was arrested, and even accidentally set a forest fire.

1960 – Johnny Cash, Vivian, and 3 daughters outside their LA home. The couple famously divorced in 1966. pic.twitter.com/9LibWDPSoX

As awful as all of that was to Vivian, she said June was her main worry, since Johnny was on the road with her a lot. Vivian claims that the way Johnny and June were portrayed in the popular movie Walk The Line is all wrong, that June was actually the one to chase after Johnny.

In the book, Vivian refers to June by saying, “This woman was a danger to my family.”

Vivian also claims that one time when she encountered June backstage, she told her “Vivian, he will be mine.”

Johnny and Vivian’s daughter Cindy agrees with her mother, saying it was June who pursued her father, not the other way around.

“Once June came along, she relentlessly — well, she wanted Dad and she was going to get him,” says Cindy. “And she did. She made herself very available, to where he pursued her back.”

Vivian makes further claims that June helped support Johnny’s addiction by giving him drugs, and that June was actually an addict as well. Despite these claims, Vivian’s friends say that she doesn’t act hostile toward June in the book.

After her divorce, Vivian went on to marry Ventura police officer Dick Distin in 1968, and she was an active and much-loved member of the community, getting involved in the Garden Club and doing volunteer work.

“She really had the heart of a saint and the wisdom of a queen,” says one Ventura resident named  Katrina Plate. “I’ve truly never met a nicer person.”

Vivian passed away in May 2005 when she was 71 years old, shortly after she finished the manuscript for her book.

In the book, Vivian confesses that she never stopped loving Johnny, and she regrets that she didn’t try harder to save their marriage, saying  “I should have been relentless at saving it, as relentless as June was at destroying it.”

According to Cindy, all her mother ever wanted was “to finally, finally have a voice,” when it came to what happened between her and Johnny. Vivian’s new book has allowed her to have the voice she searched for after so many years.

You can read the full article on what Vivian has to say about Johnny, their marriage, and June here.

What do you think of what Vivian had to say? Were you shocked?