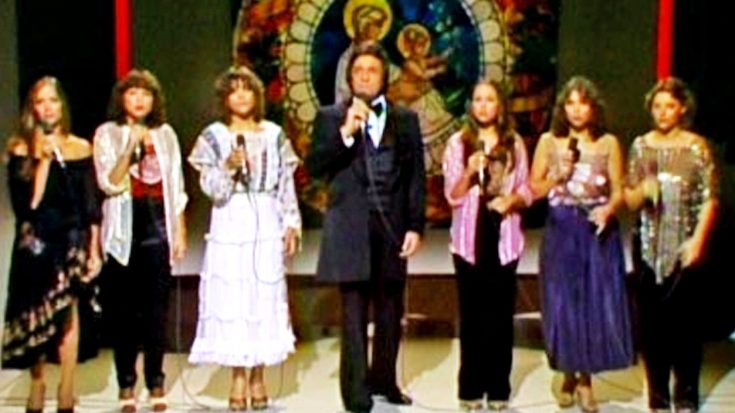 During a 1978 Christmas special, the country legend and his daughters dedicate a special song to the grandmother they recently lost.

As an annual event, The Johnny Cash Show was brought back to life as a seasonal special program nearly every year until 1985. The show would feature Johnny Cash as host and various other folk and country musicians such as The Carter Family, Statler Brothers, The Tennessee Three, Bob Dylan, Merle Haggard, Tammy Wynette and Kris Kristofferson among others.

In the 1978 CBS Christmas special, Johnny brings the six daughters of his combined family with June on stage to sing a tribute to June‘s mother, Maybelle Carter, who passed away in October of the same year.

The traditional Christmas carol dates back to 1818 when an Austrian priest wrote the lyrics as a poem for a Christmas Eve midnight mass, but sought the help of the organist to help put it to music. Many sources show that the organist Franz Xaver Gruber composed the melody in just several hours that evening.

Maybelle Carter had been a part of “country’s first family”, The Carter Family, in the ’20s and ’30s and, later, served as a lead singer in Mother Maybelle and The Carter Sisters. Her skills as a guitarist were widely recognized and she even pioneered a special way of playing the guitar called the “Carter Scratch”.

Watch the video below as Maybelle’s beloved granddaughters and son-in-law perform this truly special Christmas song in a tribute to her honor.