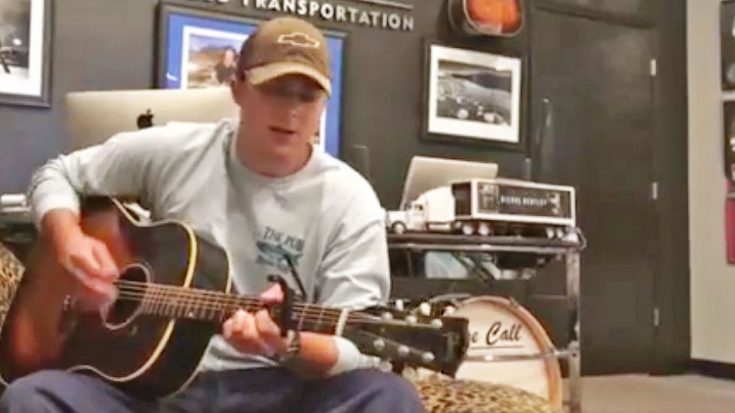 Son of famed country music star, Walker Montgomery covers his father’s “Life’s a Dance.” The 17-year-old sounds identical to his father, John Michael Montgomery, in his rendition of the hit, both vocally as well as musically.

I had so much fun sharing the stage with my son Walker and many more talented artists last week at Acoustic Jam in Lexington and Louisville. I think this pictures captures Walker giving his old man a hard time!!

A post shared by John Michael Montgomery (@johnmichaelmontgomery) on Dec 15, 2016 at 6:02pm PST

Living Up To His Dad

In a session with “Kyle’s Chaise Lounge,” the young artist performed the beginning portion of the song while strumming the melody on his acoustic guitar. His voice is so strikingly similar to his father’s that there’s no denying the musical talent in his blood.

“Life’s a Dance” was featured as the title track off John’s debut studio album released in 1992. The album went on to be 3x Platinum with three million copies sold in the United States. The song itself was well received and peaked at number four on Billboard’s Hot Country Songs chart and No.3 on the Canadian country chart.

“Life’s a Dance” sung by John’s son gives off an air of nostalgia as the song details the emotion felt by a 14-year-old boy too afraid to ask out the girl in his homeroom class. The opportunity at love vanishes when the girl moves away and the narrator goes on to compare life to “a dance” and “you learn as you go.”

“Sometimes you lead, sometimes you follow. Don’t worry about what you don’t know. Life’s a dance you learn as you go.”

Walker has since gone on to join his dad on stage at some of his concerts and lives out his father’s legacy proudly.

Glad My son Walker Montgomery could join me on stage last night.

Listen to Walker’s rendition of “Life’s a Dance” in the video below and prepare to be blown away!