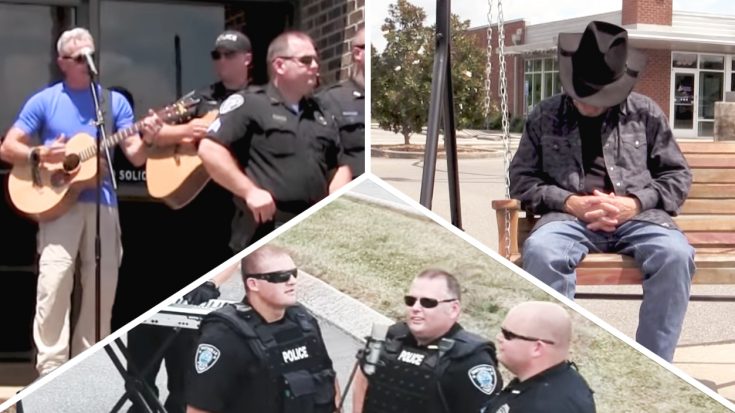 As a 2018 lip sync challenge surfaced across the internet, police departments across the country were quick to participate in the fun. They couldn’t have done it alone though, as two very special country singers decided to help out their local law enforcement.

Taking On The Challenge

The Smithville Police Department had no trouble rockin’ this challenge. Their video begins with two men on the phone. One in uniform in office and the other relaxing on the beach. When the Lieutenant tells one of his men that they are filming the lip sync challenge, the fun really begins. He gives up his day off – even leaving his phone behind in the sand – to get in on the fun!

The camera cuts to the next scene of a mud-covered 1990s extended cab Silverado pulling up in front of the police department. In walks a man waving to neighbors like he is famous – only to find out, he is.

Country music star, Aaron Tippin waltzes up to the front desk, shakes the officer’s hand and asks if he can ride with the boys. Next thing you know, he is on his way to help Officer Lance out. As they head out, Lance’s radio doesn’t work until Tippin uses it and gets a prompt response. He smirks and says “There ain’t nothing wrong with this radio,” leading into a group lip-sync of his 1992 hit song “Aint Nothing Wrong With The Radio.”

As Tippin continues nostalgically singing, Officer Lance interrupts and lets him know there is a disturbance at the Walmart and they need to get there ASAP! The drive over makes for one good time as they dance to the Cops theme song, “Bad Boys.”

As they pull up to the parking lot, there is a line of cars honking at a man blocking the entrance with a porch swing. From the conversation among the other officers, we can tell this isn’t the first time they’ve dealt with this “delinquent.”

Tippin quickly recognizes the porch swinger as none other than John Anderson. The officers ask him what he is trying to do and he calmly replies “Ha fellas, I’m just a swinging.”

After the hilarious performance, Tippin returns to the police department to find a parking ticket on his Chevy. In a streak of bad luck, he gets in and can’t get the radio to work. Officer Lance pulls up next to him to ask him what is wrong. After finding out the cause of the problem, the officer smirks and lets him know, “My radio is working just fine.”

Getting two country legends to appear in a lip sync video was pretty impressive. The Smithville PD are lucky to have both Tippin and Anderson as helpful locals!

Watch the full video below and let us know your favorite part in the comments!