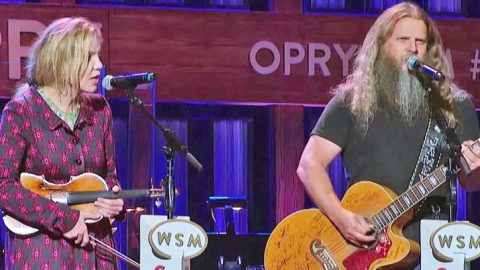 The Dynamic Duo Of Jamey & Alison

Jamey Johnson and Alison Krauss have been working together for years. While not an official duo of any kind, the two seem to collaborate whenever possible.

In 2012, Krauss appeared as a guest vocalist on Johnson’s tribute album to songwriter Hank Cochran. Together, the two sang Cochran’s song “Make the World Go Away,” which had been previously recorded by artists such as Eddy Arnold and Donny and Marie Osmond.

The duo regularly teams up for live performances as well, singing everything from “Go Tell it On the Mountain” to Willie Nelson and Ray Charles’ “Seven Spanish Angels.” They joined forces yet again during an appearance at the Grand Ole Opry, and the result was spectacular.

Johnson and Krauss opted to perform a song that’s as classic as it gets when it comes to country music. The song was “My Dixie Darling,” which was originally recorded by Lonnie Donegan. However, the Carter Family’s version of the song is the one that is most well-known today.

We could listen to Alison Krauss and Jamey Johnson all day… And lucky for us, they're both on the Opry tonight for TWO SHOWS!

Johnson took the lead on the song, strumming along on his guitar while Krauss played fiddle by his side. Krauss finally joined in with him on the chorus, singing stunning harmonies to accompany him.

A highlight of the performance was Krauss’ soaring fiddle solo in the middle. Although we couldn’t see the crowd’s reaction at that time, we’re sure everyone was watching her in absolute awe.

The crowd rewarded the duo with a warm round of applause at the conclusion of their performance. We bet they never wanted them to stop!

You can catch Johnson and Krauss’ full Opry performance of “My Dixie Darling” by tuning in to the video below. If you miss hearing that classic country sound, you don’t have to look any further than right there!