Home Video Shows 12-Year-Old Kane Brown Singing Tim McGraw’s ‘I Like It, I Love It’ 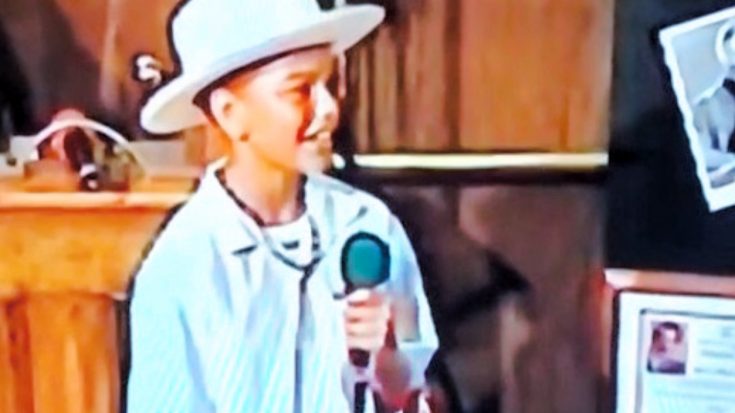 Whenever you ask a country star how old they were when they first showed interest in singing and performing, nine times out of ten they’ll tell you they were just a child. After being introduced to country music early on in their lives, these children grow up with dreams to one day make an impact on the genre like the artists who came before them.

Some country stars famously kicked off their careers while they were still kids. Just a few notable examples include Tanya Tucker and LeAnn Rimes, who both scored their breakout hits when they were only 13 years old.

Those songs were “Delta Dawn” and “Blue,” respectively.

Other country artists may not have found their claim to fame until later in life, but still carried a great love for music as a children. Some even kept themselves busy by performing in their local area, or in some cases, across the country.

One current country star first hit the stage when he was only 12 years old. That debut performance was a humble one, and now he sells thousands of tickets everywhere he travels.

Wonder who we’re talking about? That person would be none other than Kane Brown.

He’s Done So Much In Such A Short Time

At only 26 years old, Brown has already accomplished some of his wildest dreams. He has two chart-topping albums and five number one hits.

Not to mention, he also took home the CMT Music Award for Collaborative Video of the Year for “What Ifs” with Lauren Alaina. To top it all off, he won three awards at the 2018 American Music Awards, including the trophy for Favorite Male Country Artist.

But while Brown is still fairly new to country music scene (his debut EP was released in 2015), he has been singing for a lot longer than many may realize. This is something that he proved after he unearthed an old home video that shows his first-ever performance.

Brown was only 12 years old at the time, yet his passion for country music was already clear. The song he chose to sing that day was a huge Tim McGraw hit from ten years prior, “I Like It, I Love It.”

Kane Was Only 2 When This Song Came Out

Released in 1995, “I Like It, I Love It” was the first single off of McGraw’s album All I Want. The song was a smash success, and claimed the top spot on the country charts in both the U.S. and Canada.

It’s crazy to think that Brown would have been just two years old when “I Like It, I Love It” was taking over country radio. Ten years later, he was taking over a microphone as he crooned his own rendition of the rowdy hit.

While Brown’s voice clearly became deeper as he grew, you can already hear hints of that deep tone we all know and love in his McGraw cover performance. If anything, this footage proves once and for all that he was born to be a country star!

You can check out the adorable throwback clip of Brown singing McGraw’s “I Like It, I Love It” below. Now we’d love to hear him do an updated cover of the song!

Tanya Tucker Posts “Throwback” Photo Of Herself At 10…

Trace Adkins Honored Troops On Memorial Day With His Song…