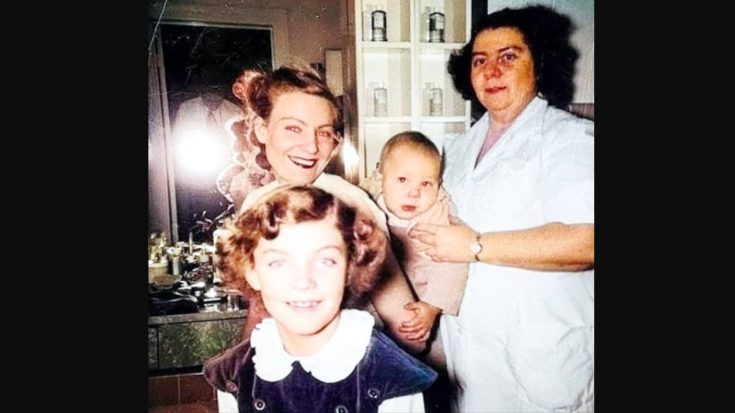 39-year-old Holly carries her grandmother’s name, as she is Holly Audrey Williams. Holly is also carrying on her family’s musical legacy because she too, is a singer.

She is known for songs such as “Waiting on June,” “Keep the Change,” “Mama,” and “The Highway.” On top of releasing her own, original music, Holly also adds to her grandparents’ and father’s legacies by performing covers of their songs from time to time.

Holly furthers her family’s legacy in another way…by sharing old photos of her grandparents and father while telling the stories behind them.

The Country Music Hall of Fame helped Holly discover one photo of her family she’s sure to treasure forever. She loved it so much, she knew she had to share it with her followers.

This decades-old photo was taken by Holly’s grandad Hank, who you can see in the mirror as he snapped the picture. The subjects of the portrait were a toddler-aged Hank Jr., Audrey, the family’s governess Miss Ragland, and Audrey’s daughter, Lycrecia.

“What a treasure taken about a year before the world lost him,” Holly said, referring to how her grandad passed away just one year later at the age of 29.

Holly tagged her sister, Hilary, and her brother, Sam, in the photo’s caption because she wanted them to see it too. “@samwillivms @hilwill look at this!” she wrote. “What I would give for just one of those bottles in the background.”

You can see the old family snapshot Hillary shared by looking at her post below.

You can see Hank in the mirror taking this picture I just discovered via @officialcmhof 🤩 Miss Ragland who loved my daddy SO much is on the far right with him, then Grandma Audrey and Aunt Lycrecia. What a treasure taken about a year before the world lost him ❤️ @samwillivms @hilwill look at this! What I would give for just one of those bottles in the background 🙏🏼

Isn’t that an incredible picture?

Like Holly, Sam and Hilary Williams are also singers. All three of them got together in early 2020 to deliver an acoustic performance of some of their dad and grandfather’s famous songs. You can enjoy the video of that performance below.

The Williams family has such a rich history, and we thank Holly and her siblings for continuing to share pieces of it with their fans.