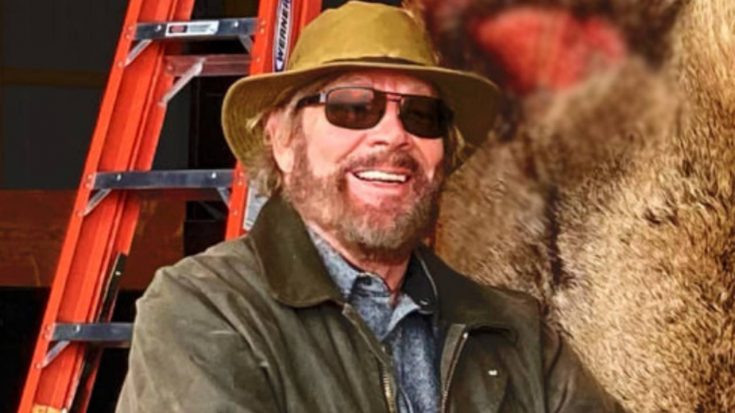 There’s a few things in life that make Hank Williams Jr. smile big: his family, country music, and being an outdoorsman. Fans have known for years how he feels about being an outdoorsman thanks to his music, in particular, his song “A Country Boy Can Survive.”

While the pandemic has slowed down Hank Jr.’s touring schedule a bit, it hasn’t slowed down his time with his family or spending time outdoors. He even goes fishing after his concerts! On July 10, he posted a photo on Facebook and said, “After the Natchez, MS concert, catching fish in a great, secret Mississippi fishing spot.”

He continued his fishing posts over Labor Day Weekend.

On September 22, he took his grandson on his “first big South Alabama dove shoot,” and they came home successful! In the post, he wrote that they would be having a “famous” Hank cookout with the doves they shot.

His most recent hunt came in November when he went on an elk hunt. The country legend posed next to his latest kill, which towered over him, with a huge smile on his face. He told his 3.4 million followers, “Got this one from 300 Yards! A cow elk is the BEST for eating. Elk chili on a cold day anyone?”

According to Kentucky Elk University, “Average elk weights vary between 450 pounds for a cow (female) and 800 pounds for a bull (male).”

We’d love to try some of Hank Jr.’s elk chili, or even get his recipe! See his post below.