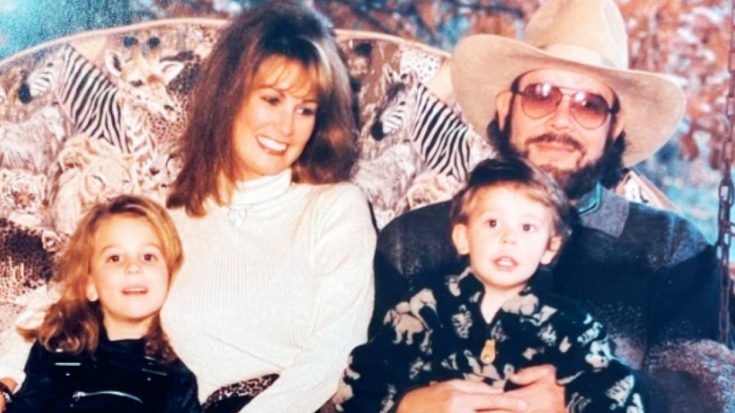 On March 22, Hank Williams Jr.’s wife, Mary Jane, unexpectedly passed away at the age of 58. The couple had been married for over 30 years.

Hank Jr. and Mary Jane met at one of his shows. They dated for years before they married in 1990. The couple shared two children: a daughter named Katie and a son named Sam. Katie was killed in a car accident in 2020, and Sam is a country music artist.

A week after Mary Jane passed away, Hank Jr. shared a statement thanking his fans for their thoughts and prayers. He also said that his family “encouraged” him to perform at a then-upcoming show.

“Not only is it healing but I do not want to disappoint my fans who have purchased tickets,” Hank Jr. said in his statement.

True to his word, Hank Jr. took to the stage that weekend. He was joined by his daughter, Holly, and Sam.

Now, a little over a month after Mary Jane passed away, Hank Jr. is reflecting on the memories they made together.

Hank Jr. shared two photos, the first of which shows him and Mary Jane together at the very start of their relationship. The second photo appears to be from more recent years. It shows Mary Jane smiling while showing off a turkey she claimed on a hunt.

“I met Ms. Mary Jane Thomas on July 4th, 1984 in Daytona Beach, FL,” Hank Jr. said. “Who knew that the Beach Beauty would turn out to be a world-class hunter and adventurer? We traveled all over the world on hunts and safaris, but our favorite was hunting right here in Tennessee!”

You can see the photos Hank Jr. posted of his beloved Mary Jane below. We’ll continue to pray for him and his family during this difficult time.