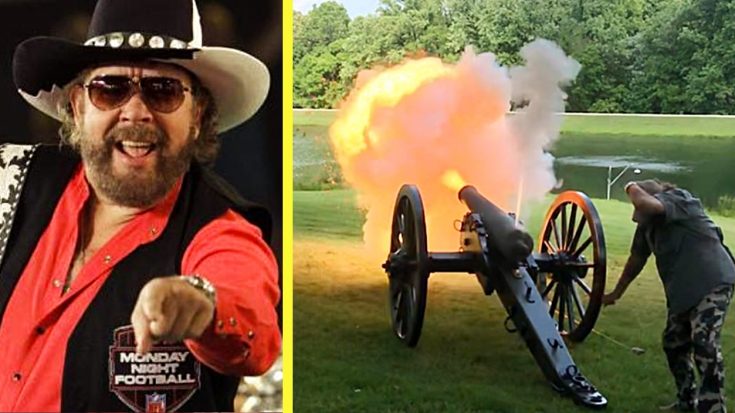 One of the biggest Civil War buffs around, this fun and famous member of country music royalty chose to mark his 70th birthday in an iconic way. One that’s just as badass as he’s always been!

Hank Williams Jr., a renowned musician both in and outside of country music, isn’t just any ol’ redneck. He’s got a penchant for priceless collectibles from some of the most impactful times in American history – and he’s not afraid to use them!

Hank Jr. is a huge history buff and especially enjoys memorabilia, artifacts, and relics from the Civil War. Because of this, and his incredible career, he’s been able to amass a giant collection of cannons, artillery, weapons, and other items that were used during that time period.

One of his favorite artifacts from the American Civil War are the rolling cannons they used. He enjoys them so much, in fact, that he has owned quite a few – and in 2016, it was widely reported that he had elected to sell one of his original Civil War cannons.

Known by collectors as the 12# Napoleon, this cannon featured the original 4.62-inch bore and has been said to be one of the most desirable cannons of the era.

To ring in his 70th birthday on May 26th, 2019, Hank Jr. decided to get a little “fired up” and roll one of his cannons out to a spot that overlooked a quaint pond. This authentic civil war cannon is truly the work of great craftsmanship and quality – because it still works perfectly more than 156 years later!

Happy birthday Dad I had to get the icon an iconic gift this year, so I commissioned a painting from @raybomusic to commemorate his career. Thank you so much for your talent on this project Ray!! Being in the spotlight from a teenager on, my father’s life has been a whirlwind. I’m so thankful that God spared your life in 1975, I see the incredible things you’ve done from selling 70 million albums to being there for your youngest kids. Everyone who is anyone in music looks up to your authenticity, independent attitude, and ability to straight up entertain. But y’all don’t get to see that he’s actually the funniest person on earth without trying. For example, the stories and manner in which he shot his Civil War cannon today ?? As a child I was intimidated by my family’s status and my dad’s career.. I grew up to now idolize so much of who you are. Everyone say Happy Birthday Hank!!!! He’s already asleep that’s for damn sure ❤️❤️❤️❤️❤️

Sharing a super-cool video and some neat photos of their dad’s momentous 70th birthday celebration, both Hilary Williams and Sam Williams took to social media and reminded the world what a badass their dad really is!

“Happy 70th Birthday Dad! Blasting off into your next decade!!” Hilary shared. “Just a normal day in the Williams family shooting off cannons from the civil war.”

It must have been quite the day for Bocephus because the grin he had after firing off this cannon really cannot be beaten!

Check out all of the photos and videos below from Hilary’s post – just swipe to the left to see more!

Happy 70th Birthday Dad! Blasting off into your next decade!! ❤️❤️❤️. Just a normal day in the Williams family shooting off cannons from the civil war???