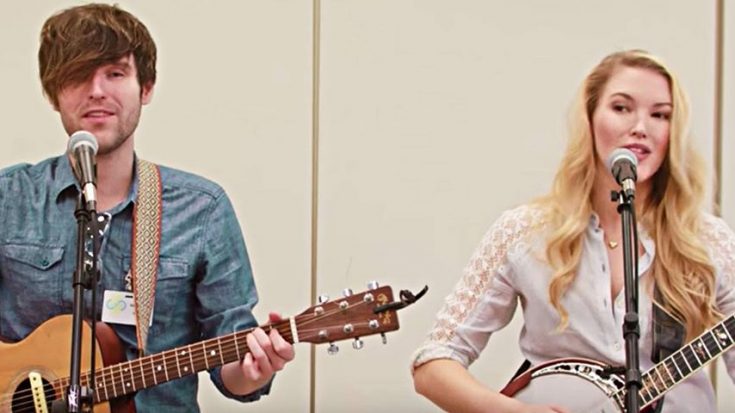 Glen Campbell may be gone, but he’s certainly not forgotten. And, his family is making sure that never happens.

Posted by Glen Campbell: The Original Fan Forum – News and Information on Thursday, May 25, 2017

Ashley Campbell and Shannon Campbell, children of the late singer, honored their father on what would have been his 82nd birthday with a heartfelt performance of “Gentle On My Mind” at Abe’s Garden: Alzheimer’s and Memory Care Center of Excellence in Nashville, TN.

The musical sibling duo entertained residents and staff members, reminding their dad in heaven and everyone who’s ever loved him, that he’s “‘ever smilin’ ever gentle on [their minds.]”

Glen Campbell formed his first band in 1958 at the age of 22 and continued performing and recording until he was diagnosed with Alzheimer’s disease in 2011. His five-decade career was filled with many hits and memorable moments. “Gentle On My Mind,” recorded by Campbell in 1967, proved to be a smash hit on both the country and pop charts. The song won three Grammy awards, including Best Country & Western Song, and helped catapult Glen’s career.

On this day in 1968, at the 10th Annual Grammy Awards, Glen wins Best Male Country Vocal Performance and Best Country &…

A Warm-Hearted Tribute To A Big-Hearted Man

Because the elder Campbell happily and comfortably lived out his final years at Abe’s until his death on August 8, 2017, it was only fitting the children of the country star would show up less than a year later to pay him tribute. They honor him in a way that would have pleased their father, just as it did the grateful audience.

Truly, which of the Rhinestone Cowboy’s songs could more accurately reflect their thoughts and wishes than the iconic, “Gentle On My Mind.” The only way it could mean more is if Glen was there to sing it himself.

Gone, But Not Forgotten

Close your eyes, remember Glen Campbell and listen to Shannon and Ashley Campbell let their celebrated father know he’s never farther away than their nearest thought.

Did you have a favorite Glen Campbell song or memory? What did you think of the tribute?