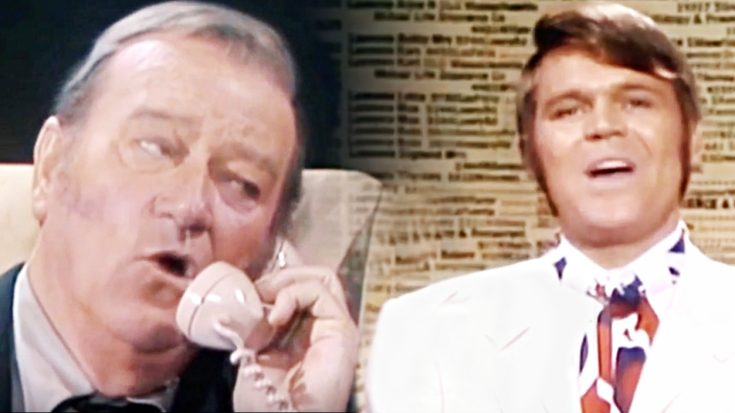 Surrounded by a star-studded cast, Glen Campbell performed a hit Beatles song before jumping into a series of hysterical skits that are sure to have you roaring with laughter.

The show opens with him sitting on top of a ginormous phone singing the lyrics to “Hello, Goodbye.” He used the chart-topping song to segway into skits about how the telephone works – each more hilarious than the next

In the first skit, Campbell dials in a little help from popular American rock band, The Monkees. His buddies help demonstrate that touch dial phones make music when you push the buttons and they put on a full-blown musical performance using them!

The boys continue on to provide many laughs through a variety of skits including cave men, secret agents, and a less-than-moral producer. But the real treat is at the end of the video when Campbell’s friend and True Grit costar, John Wayne makes a very special appearance.

After Wayne makes a few jokes himself in his true “John Wayne” style, Campbell comes back on to sing them off the air with his talented, twangy voice.

The show was filmed back in 1969 for Glen Campbell’s Goodtime Hour and had audiences across the nation laughing along with the clever crew from the comfort of there homes. They sure don’t make television like they used to.

You can catch all the laughs in the video below!