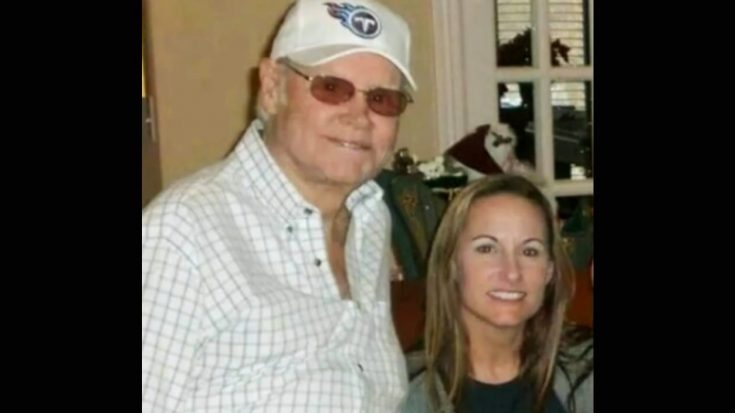 On April 25, 2013, George Jones passed away. To the country music world, he was an icon. To Georgette Jones, he was dad.

Georgette is the only child George shared with his third wife and fellow country music legend, Tammy Wynette. Tammy had three older daughters and George had an older daughter and two older sons.

George and Tammy’s marriage ended in divorce, but they continued to perform and record together throughout their careers. Tammy passed away on April 9, 1998.

Just 15 years after she lost her mom, Georgette lost her dad as well. On the nine-year anniversary of his death this year (2022), Georgette recalled the moment when she learned about her dad’s passing.

Georgette said that her husband had his first show with Shooter Jennings on April 25, 2013. He had to wake up early and had been up late the previous night. So he and Georgette put their phones on silent so he could rest.

When Georgette woke up, she saw she had 11 missed calls, six of which were from her brother, Jeff:

“I knew before calling him what he would say and I hesitated for a min to call because I didn’t want to hear it,” she said. “Maybe if I never talked to anyone or watched TV or answered any call….maybe it wouldn’t be true. But I did call and it was true.”

Georgette said she never got the chance to tell George goodbye.

After nine years, Georgette says she’s “still grieving” the loss of her father. But she is trying her best to focus on all of the wonderful memories they made together, rather than dwell on the pain.

“Daddy, you are always in my heart and on my mind. I love and miss you more than I can ever say,” she ended her post.

You can read Georgette’s full post below. She also shared a photo of her and George together, which she said is one of her favorites.