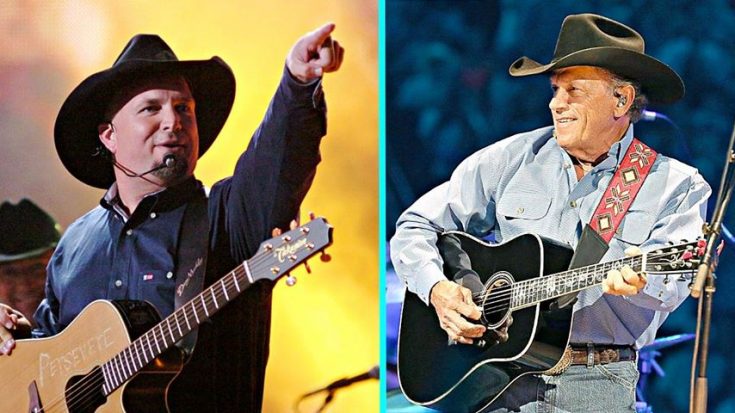 Most folks like to say they’ve lived their lives with no regrets.

Truth be known, that’s probably the same for all country stars who’ve passed up songs they didn’t feel good about, didn’t think the tune was catchy enough or maybe even didn’t “feel” the song.

His Hit That Almost Wasn’t

We can only guess, but you have to wonder if George Strait ever felt that way about passing up the opportunity to record “Friends In Low Places.” Yes, that’s right. The song that ultimately became known as Garth Brooks‘ biggest song almost wasn’t.

Garth Brooks – The Anthology Part 1 (a book with his music in it) details the first five albums of the megastar’s career and everyone involved. Brooks revealed that the two biggest songs he ever recorded were almost never recorded by him.

Garth Wanted To Be George

Brooks says he wanted to be Strait for years before he ever signed a recording contract. He looked up to him. If he had his way, The King of Country would have recorded  “Friends In Low Places” instead of him. But, as you know, that didn’t happen.

On page 82 of his Anthology, Garth said Strait had an opportunity to record the hit song, but passed.

Brooks sang a pretty good imitation of Strait he admitted, especially during the demo for “Friends In Low Places.”

He Made It His Own

“I did my best George Strait on it years before I ever had a record deal…” recalled Garth. That’s who the record label really wanted to sign.

After hearing the song and singing it, he proceeded to make it a regular on his pre-fame tours. Long before it became “his” song, Brooks was bringing people to their feet and getting them to sing along, without any idea he was on his way to stardom himself.

Eventually, Brooks signed a contract to make the song his own and released it on his second album No Fences in 1990. The album sold more than 17 million units; the single “Friends In Low Places” hit number one in eight weeks and remained on top four more weeks.

The boy from Oklahoma who was selling shoes before he was discovered, even has a stree, named after a couple of his epic songs.

So it was, the song that became known as Garth’s biggest song, that was voted 1990 Single of the Year by both the Academy of Country Music and the Country Music Association, could’ve been Strait’s.

Get ready to sing along to this classic video when a much younger Garth Brooks sang the popular song about escaping into drinking. Bet you can’t get through the song without singing at least a few lines!