George Jones Pays Tribute To Fallen Soldiers In ‘50,000 Names Carved In The Wall’ 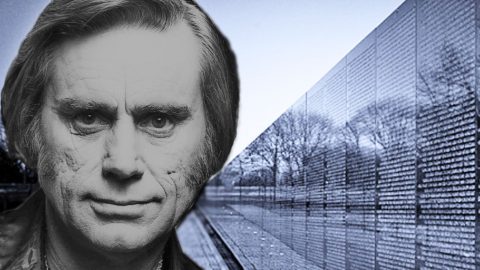 Country legend George Jones honored the fallen American soldiers of the Vietnam war in his classic country song “50,000 Names Carved in a Wall.”

The song is about the Vietnam Veterans Memorial which is a wall the spans two acres in Washington, D.C. and has the names of the fallen inscribed onto it. The wall honors U.S. service members of the Armed Forces who fought and died for their country in the Vietnam War.

“There’s combat boots that he used to wear when he was sent over there,” sings George. “There’s purple hearts and packs of gum. Fatherless daughters and fatherless sons, and there’s 50,000 names carved in a wall.”

There's a boy scout badge and a merit pin, Little American flags waving in the wind, And there's 50,000 names carved in the wall – George Jones –

The country legend spent his own time serving in the U.S. Marine Corps before his discharge in 1953. “50,000 Names Carved in a Wall” was released off George’s 2001 studio album The Rock: Stone Cold Country when he was 70 years old.

You can watch the video for George’s country classic in the video below.