General Chuck Yeager, The First Man To Break The Sound Barrier, Has Died At 97 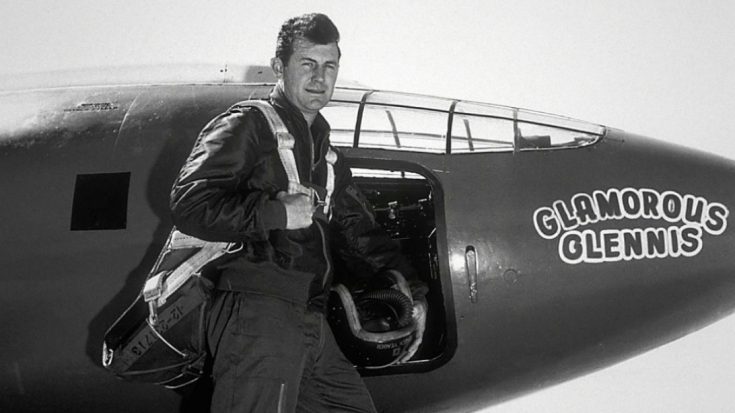 “It is w/ profound sorrow, I must tell you that my life love General Chuck Yeager passed just before 9pm ET. An incredible life well lived, America’s greatest Pilot, & a legacy of strength, adventure, & patriotism will be remembered forever,” his wife of 17 years wrote.

Fr @VictoriaYeage11 It is w/ profound sorrow, I must tell you that my life love General Chuck Yeager passed just before 9pm ET. An incredible life well lived, America’s greatest Pilot, & a legacy of strength, adventure, & patriotism will be remembered forever.

Yeager began his legendary career as a private in the United States Army Air Forces in 1941 and served as an aircraft mechanic before enlisting in pilot training during WWII. He went on to become a P-51 fighter pilot and shot down over 11 enemy aircraft on the Western Front.

It was during Yeager’s time as a test pilot following the war that he became the first man to officially break the sound barrier. On October 14, 1947, when he was just 24-years-old, he flew the experimental Bell X-1 at Mach 1 (approximately 767 miles per hour) at an altitude of 45,000 feet. That record was followed by more speed and altitude records.

Yeager was promoted to brigadier general in 1969 after commanding fighter squadrons and wings in Germany and Southeast Asia during the Vietnam War, eventually retiring in 1975. Following his retirement, Yeager continued to perform military test flights. In 1997, on the 50th anniversary of breaking the sound barrier, Yeager flew an F-15D Eagle past Mach 1. The flight was intended to be his final flight for the Air Force, but he returned to flying in 2000 and continued to fly for twelve more years until he broke the sound barrier again at the age of 89.

In 1983, a movie adaptation of Tom Wolfe’s best-selling book, The Right Stuff, was made and launched Yeager to worldwide fame. The movie highlighted Navy, Marine and Air Force test pilots who were involved in aeronautical research at Edwards Air Force Base, and the Mercury Seven, the seven pilots who were chosen to participate in the first human spaceflight launched by the United States.

Yeager was married to his first wife until her death from ovarian cancer in 1990. The couple shared four children. In 2003, Yeager married actress Victoria Scott D’Angelo.

Our thoughts and prayers are with Chuck Yeager’s loved ones during this time.