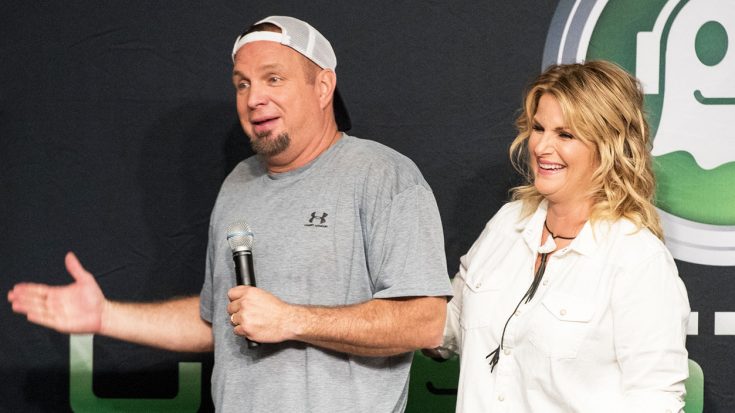 As if we couldn’t fall more in love with this couple, they made us do it all over again! Garth Brooks and his wife, Trisha Yearwood are each other’s biggest fans, from his tour to her cooking show, there is no shortage of support. This past year both Brooks and Yearwood have put out announcements for big news but Brooks’ reaction to his wife’s might just be our favorite.

"She's in love with the boy!" Happy Valentine's Day every day to the love of my life. xoxo Trisha #ValentinesDay #Love #HappyValentinesDay

On his live segment, Studio G, Brooks talks all things related to his tour, his music, his fans, and more. On yesterday’s segment, he got Tweeted at by a fan regarding Yearwood’s big announcement that is coming. Yearwood took to Instagram with a series of different photos that meshed into one stunning photo of her. In the photo, she’s rocking suit and tie attire with a sleek black fedora. Fans are going nuts over what the announcement will come following the photo as all she captioned it was “#LBF.”

Well, it was obvious that Brooks is more than excited to share his wife’s big news but for now, he’ll try to keep it a secret. When a fan asked for Yearwood to appear on his live show to explain, Brooks jokingly responded with “Hell no.” Following, the TV behind the singer pulled up Yearwood’s picture and Brooks got gushy. Aside from dying to give the fans a hint (after being told his track record isn’t the best for secrets), he couldn’t help but talk about how stunning his wife looked.

Brooks’ admiration for his gorgeous wife doesn’t end there though; he loved her photo so much… he decided to imitate it. Brooks posted an Instagram where he was wearing his cowboy hat to the side covering an eye, identical to Yearwood. He even added the “#LBF ” to his caption as well. After 12 years of marriage, they continue to be each other’s number one fans and we love seeing it.

So much to talk about, so little time! love, g #StudioG