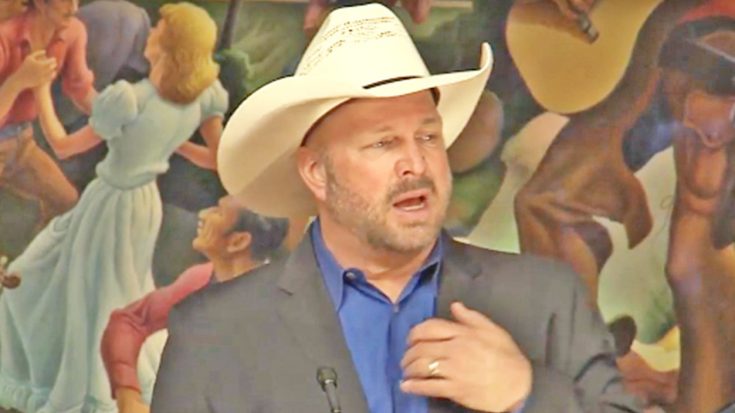 On Tuesday morning (March 27), Garth Brooks and Trisha Yearwood stood in front of an audience in the Hall of Fame rotunda to reveal the three newest inductees into the Country Music Hall of Fame.

Telling the story of how the inductee almost single-handedly saved Bluegrass music when the father of Bluegrass, Bill Monroe, was nearing the end of his life by forming a record label dedicated to keeping that genre of music alive, it moved everyone in the audience.

Brooks told the audience about the inductee’s accolades including 8 CMA Awards, 15 Grammy Awards, and 13 International Bluegrass Awards, as well as his many collaborations from Flatt & Scruggs to Bruce Hornsby to Keith Urban.

Through tears, Brooks said, “I cannot tell you how big of an honor it is, and a pleasure, to introduce the newest inductee to the Modern Era Artist category of Country Music Hall of Fame, Ricky Skaggs.”

Brooks and Skaggs shared a sweet embrace after the announcement as the audience gave him a standing ovation. Watch the emotional moment in the video below, which begins around the 1 hour mark.