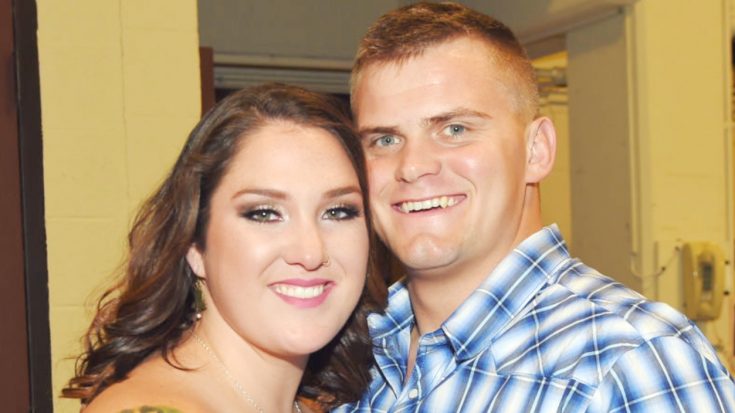 Garth’s Daughter Gets Engaged At His Concert

Every now and then, country fans choose to pop the question to their significant other in the middle of their favorite singer’s concert. That’s the kind of proposal one young couple experienced in 2017, only the artist performing on stage was the bride-to-be’s father.

On her birthday in 2017, Allie Brooks was at her father Garth Brooks‘ concert with her boyfriend, Jonathan Roberts. As her dad sang his romantic hit “She’s Every Woman,” Allie was stunned when Jonathan dropped down to one knee and asked her to marry him.

The couple finally tied the knot on October 6, 2018. At the time, the only thing the public knew about the couple’s nuptials was that they enjoyed donated Volunteer Vodka.

Allie did release one photo that offered a sneak peek into the wedding, but it didn’t show her or Jonathan. Instead, the photo was of the couple’s dog Eve, wearing a tutu with glittery trim.

“My day was perfect,” Allie wrote. “This is all ya get for now…”

My day was perfect. This is all ya get for now✌? see you in a week society!!

The only glance fans got at the bride’s dress was in a photo shared by her best friend Carly Rogers.

Allie is only shown from the waist up, but the snapshot gave fans a little taste of what her wedding day look was like.

Here’s to a best friend who fell in love with her best friend. Thank God for @tinder ♥️? @moonlit_allie @jrob184

The Photos Are Finally Here

Finally, over a month after she said “I do,” Allie shared a stunning new set of snapshots from her wedding to Jonathan.

The first photo is a breathtaking black and white snapshot of the happy couple, their heads resting against each other while looking completely at peace. You finally get a full glance at Allie’s elegant dress in the second photo, which shows its elaborate train and off-the-shoulder back, showcasing some of her tattoos.

In the third photo, the couple is seen standing in front of some gorgeous natural scenery while Allie plants a kiss on her groom’s cheek. And of course, what set of wedding photos would be complete without a snapshot of the couple’s first kiss as man and wife? You can see that as the fourth photo in Allie’s set.

Although Garth doesn’t appear in any of the photos, we’re sure he was over the moon with happiness on his daughter’s special day.

Between getting married and kicking off her music career after graduating college, 2018 has been one busy year for Allie! Now that you’ve enjoyed glancing through her wedding photos, check out her singing talent by tuning in to the clip below.

Congratulations to Allie and Jonathan! We wish them many years of love and happiness together.