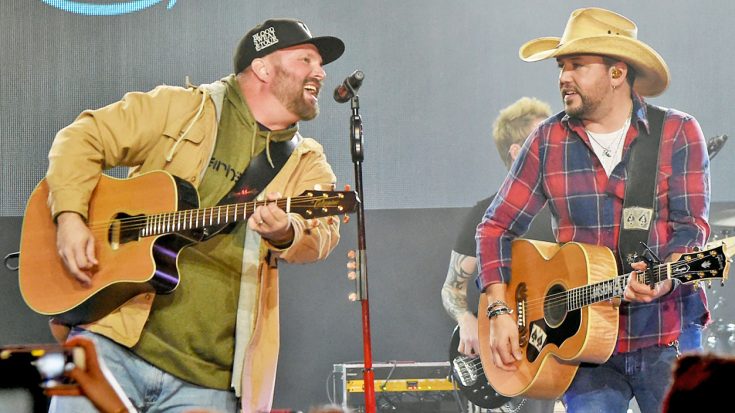 You never know what you’re going to expect during the annual Country Radio Seminar held in Nashville! The 2018 event brought the surprising announcement that Dierks Bentley and Luke Bryan would not be hosting the ACM Awards, as well as this incredible moment – and that was only on the first day!

Jason Aldean was performing his set at the Amazon Music show at the Omni Hotel when, in the middle of his song, “My Kinda Party,” he brought out a special duet partner – none other than Garth Brooks!

Always great to catch up with this guy! Thanks for jammin with us last night at the Amazon Music party Garth Brooks. #crs #garthbrooks #friendsinlowplaces

Fans were enjoying Aldean’s rowdy rendition of his hit song, when he took a moment to tell everyone that someone was joining him.

The audience cheered, not knowing who it would be, but went completely wild when they saw it was Brooks! You can clearly tell that this audience had absolutely no clue that he was going to show up!

Brooks wasted no time and dove right into the second verse of Aldean’s song, interacting with the crowd as he did so. You can watch Brooks’ stage-crashing, as well as the “My Kinda Party” performance below.

Jason Aldean and Garth Brooks! Day one of the Country Radio Seminar was a success!!

Not only did they perform one of Aldean’s songs, they also joined forces for an epic version of “Friends In Low Places.”

Brooks sang the first two verses and Aldean took over lead vocals for the third “secret” verse, which isn’t featured on the recording, but is a staple at the “Much Too Young” singer’s live shows.

Watch Brooks and Aldean perform “Friends In Low Places” in the video below.

When in Nashville for a radio convention, one tends to run into a country music artist. Or two. Like Jason Aldean and Garth Brooks.