Elvis Got Rejected By Major Record Company In 1954 Letter 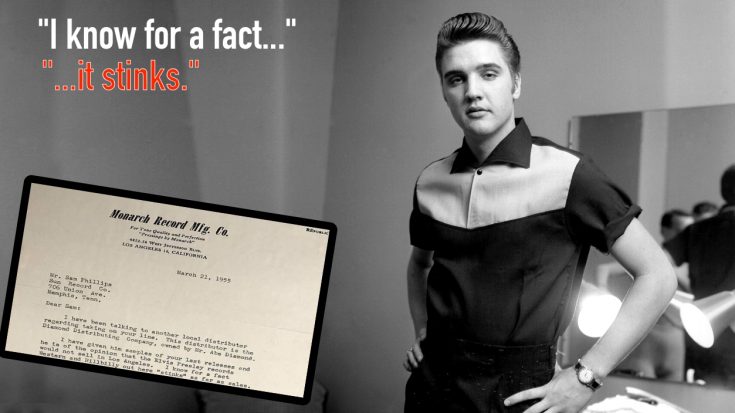 Under 12 months before Elvis Presley would become a worldwide singing sensation and issue his killer hit “Heartbreak Hotel” to the charts – he was savagely rejected by a record company in Los Angeles and the letter is still around today.

Headed up for auction, the letter is dated March 21, 1955, and comes from Monarch Record Mfg. Co – addressed to Sam Phillipps who was an executive of Sun Records in Memphis right where Elvis was recording his first few songs.

Phillips penned multiple letters to various radio DJs, producers, record companies, and labels trying to get Presley noticed and earn him some time on the airwaves. Presley had just released his very first single “That’s All Right, Mama” in 1954.

In the rejection letter from Monarch Records executive Nate Duroff, he says that he “knows for a fact” that Western and Hillbilly music “stinks” out in Los Angeles – in terms of sales.

This letter and many others that span more than a year Presley was contracted with Sun Records are going up for auction by Henry Aldridge & Son LTD.

Check out their full post below along with a copy of the letter.

We are honoured to be auctioning one of the most important archives of early Elvis Presley memorabilia in private hands on Saturday. The collection numbers 47 letters that chronicle the Genesis of Elvis’s career when he joined Sun in July 1954 and the release of his first record That’s All Right Mama. Bid live @the_saleroom @invaluableofficial #elvis #elvisking #elvis #elvispresley #lasvegas #rockandroll #music #theking #elvisking #elvispresleyfans #memorabilia #memphis #nashville #tennessee #graceland #lasvegas #musicmemorabilia #history #iconic