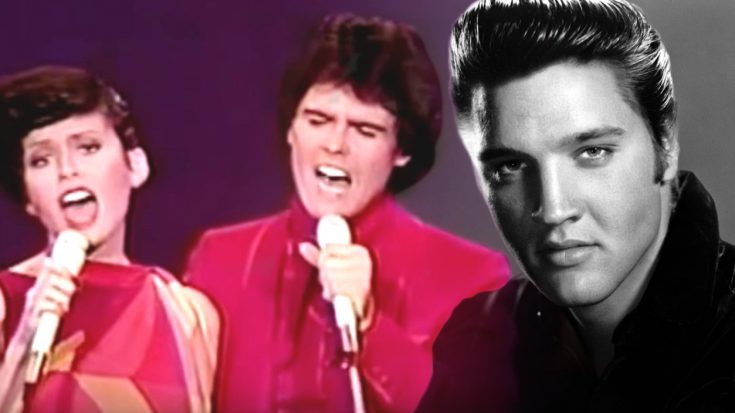 After news of his tragic passing swept the world and the entire music industry was left shocked – this insanely talented sibling duo honored The King with a specially-picked medley of his hits.

Donny & Marie Osmond have been some of the biggest names in the entertainment world for decades – and way back in the 70s, they even had a hit television variety show called Donny & Marie.

And look who we've got here; Donny and Marie Osmond! 😉

The pair were some of the most successful youngsters to hit the airwaves back in that era and together, their show reached millions all over the world.

The Death Of An Icon

In August 1977, a revolutionary part of music’s history passed away at his home in Memphis, Tennessee. Elvis Presley had become famous for his groundbreaking blending of different styles of music.

His death shook the world and fans poured into Memphis from all over the country and across the world mourning the death of a real-life legend.

"Whether skies are gray or blue, any place on earth will do just as long as I'm with you." #MusicMonday http://bit.ly/2wevlU5

A Medley In His Memory

Taking to the stage of their variety show, Donny and Marie opened the show explaining the tragic passing of Elvis to the audience.

“Last summer the world lost one of the single greatest forces in the history of popular music,” Donny says solemnly with his arm around his sister.

“He was a man who influenced the style of our whole generation – and generations to come,” Marie added.

Together the two parted ways on the stage before jumping right into a mash-up medley of The King’s most treasured hit songs – “Love Me Tender,” “Don’t Be Cruel,” “Can’t Help Falling In Love,” and others.

Watch this unforgettable medley by this chart-topping sibling duo in memory of the one and only Elvis Presley.